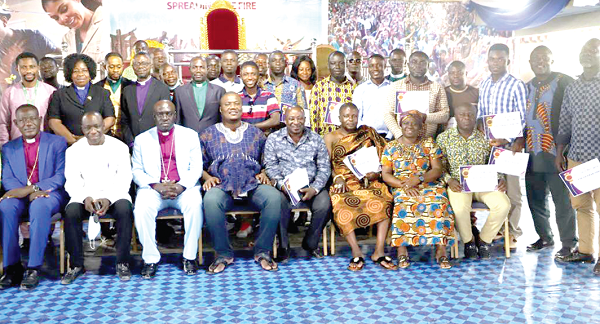 Dr Nana Ayew Afriyie (in smock), MP for Effiduasi-Asokore, Rev. Dr Divine Agyeman Badu (seated 3rd from left) and some dignitaries with the assembly members after the seminar. Those with them include Mr Osei Adiyiah (seated 2nd from left), the DCE for Sekyere East.
30.5k Shares

A senior lecturer at the Department of History and Political Studies, Kwame Nkrumah University of Science and Technology (KNUST), Dr Samuel Adu Gyamfi, has reiterated the need for the government not to impose projects on Metropolitan, Municipal and District Assemblies.

He said government needed not to impose projects on the MMDAs, except where those projects were national in character.

“We must allow the MMDAs to take their own decisions regarding projects, financial management, education, health, sanitation and all other forms of development for the people living in the respective jurisdictions,” he stressed.

Dr Adu-Gyamfi stated this at a seminar on leadership for 38 assembly members in the Sekyere East District in the Ashanti Region.

It was organised by the Effiduasi Diocese of the Shiloh United Church in collaboration with the district assembly.

It was to build the capacity of the assembly members to enable them to be relevant to their electoral communities and enhance the decentralisation process.

Dr Adu-Gyamfi also urged assembly members to be innovative and rally support from their respective electoral areas and to help augment government’s effort in transforming the communities.

He advised the assembly members not to be partisan but serve as a unified force in getting development projects to their electoral areas.

It is the general belief that managing districts is less cumbersome than running things nationally and also ensures that no part of the populace is left out in national programmes and projects, especially in the decision-making process.

For his part, the DCE, Mr Adiyiah, said it was incumbent on the people to pay their taxes to enable the assembly to mobilise enough revenue to bring development to the area.

“Let’s honour our tax obligations,” he advised the residents.

That, he said, was the only way to help bring development to the people.