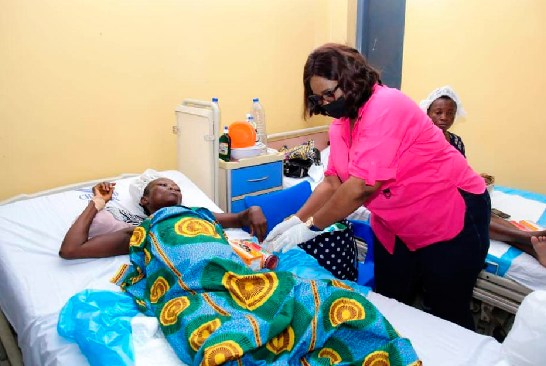 Maame Efua Sekyi-Aidoo Houadjeto, the Deputy National Women’s Organiser of the NDC, giving a gift to one of the patients

The Korle Bu Teaching Hospital has released three breast cancer patients who were detained due to their inability to settle their hospital bills.

The three women, who were detained at the premier teaching hospital, heaved a sigh of relief after the Deputy National Women’s Organiser of the National Democratic Congress (NDC), Maame Efua Sekyi-Aidoo Houadjeto, settled their medical bills.

The beneficiaries, Sarah Acquah, Akua Danso and Anti Serwaa had undergone medical treatment for cervical and breast cancer but had been at the facility for five months after they failed to honour their financial obligations.

The month of October has been set aside globally to create awareness of breast cancer.

In line with the breast cancer month, Ms. Houadjeto together with her team, identified the women and moved to save them.

The team also donated toiletries and detergents worth about GH¢10,000 to the medical staff and patients at the ward.

One of the beneficiaries, Sarah Acquah, 65, in an interview with the media, said she was abandoned by her family after she was diagnosed with her condition.

“My sickness has taken a great toll on me since I came here. Due to the nature of my ailment I expended all my monies. I reached out for help from my family but I was ignored, even my children have abandoned me,” she said.

She further explained that since she was detained some months ago, she had been praying for a good Samaritan to come her way.

“I have always been praying and God has answered my prayer. I am very grateful to her (Maame Afua Sakyi Addo Houadjeto) and her team. I pray God restores unto her whatever she has lost and I pray she never lacks,” she said beaming with smiles.

For her part, Madam Houadjeto said the decision to defray the medial bills formed part of her contribution towards raising awareness about the impact of breast cancer across the globe.

“The NDC women’s organisers always put together a programme to create awareness about breast cancer. So I decided that apart from creating awareness outside of Korle Bu let’s come inside Korle Bu and also find out who is being treated and how they are being treated. We realised that they were treated well but a few of them couldn’t pay their bills so we came in to support them and also donate a few things to the ward and not only to pay their bills but also to give them something to rejoice over. What we are doing here is all about charity,” she said.

She also admonished charity organisations to support patients struggling to settle their bills.