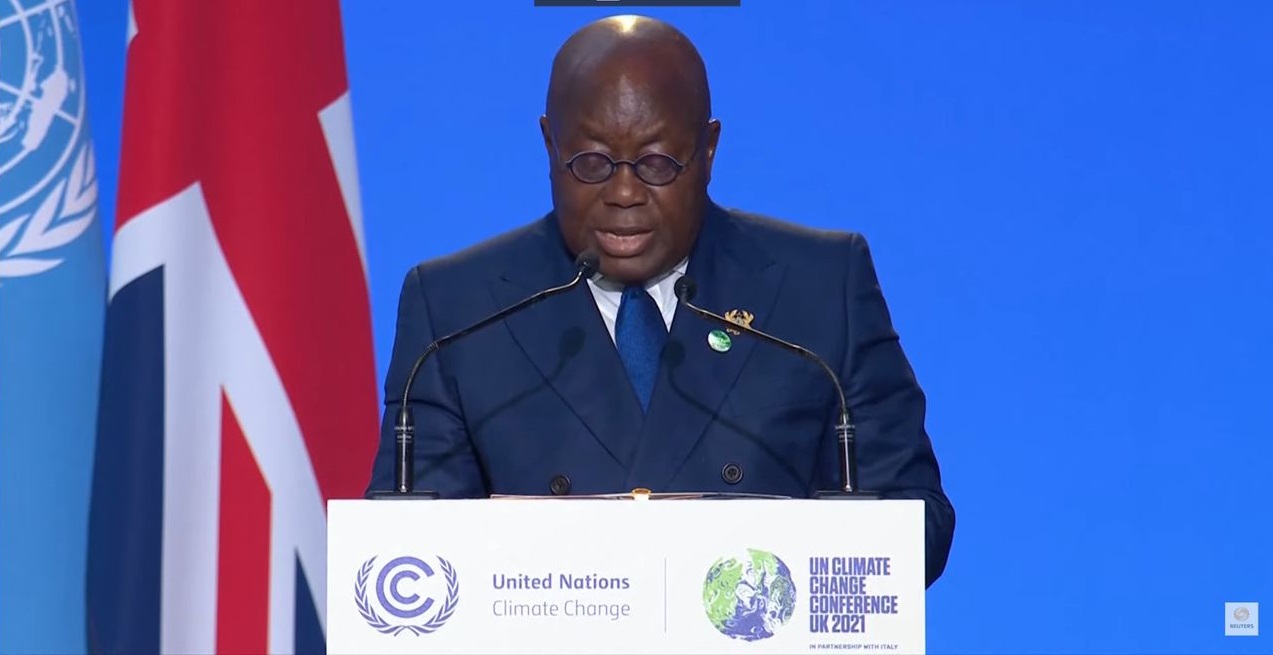 “Ghana acknowledges the importance and effects of Climate Change, and the urgent need to combat it, and we acknowledge equally the importance of protecting our development. We believe that a balance must be struck and maintained between our social, economic and environmental imperatives.”

These were the words of the President Nana Addo Dankwa Akufo-Addo, on Tuesday, November 2, 2021, when he delivered Ghana’s statement at the UN Climate Change Conference, COP 26, currently ongoing in Glasgow, Scotland.

Taking his turn to address delegates on day 2 of the Summit, President Akufo-Addo stated that climate change is the greatest threat to the realisation of the Sustainable Development Goals, as it has enormous impact on the fundamentals required for survival on earth.

“Even though we, in Africa, are the least of the contributors to this phenomenon, responsible for less than four percent (4%) of the global volume of carbon emissions, we suffer the most because our agrarian and resource-driven economies are peculiarly susceptible to the effects of climate change, and our capacity to withstand its shocks is weak,” he said.

Agriculture, water, energy, and the extraction of mineral resources, the President said, are essential drivers of developments in African countries, but, at the same time, are characteristically sensitive to changing climate.

With the African Development Bank stating that Africa will need some US$3 trillion “in mitigation and adaptation by 2030” to enable her implement nationally determined contributions, he noted that the question of financing Africa’s commitments naturally arises.

“The Almighty has blessed our lands with abundant natural resources, and it would be wholly unfair for the world to demand that Africa abandons the exploitation of these same resources needed to finance her development, and help us to cope better with the threat of climate change, at a time when many countries on the continent have only just discovered them,” President Akufo-Addo said.

He continued, “The development and industrialisation of the wealthy nations of today were also hinged on the exploitation of their natural resources. This development came at the expense of pollution and the emission of greenhouse gases. Even today, the western world is responsible for 76% of carbon emissions.”

Africa, the President said, is naturally very disappointed by the failure of the wealthy nations to honour their commitments of making available one hundred billion dollars (US$100 billion) annually to the poorer countries to assist the continent in the fight against climate change, and by the unavailability of the technology transfer that will help Africa find sustainable ways of charting a path out of this existential crisis.

“Those same nations are, however, insisting that we abandon the opportunity for rapid development of our economies. That would be tantamount to enshrining inequality of the highest order, a totally unacceptable conclusion,” he added.

President Akufo-Addo stressed that “We must find a solution that is equitable and fair; a solution that levels the playing field; a solution that recognises the historical imbalances between the high emitters and low emitters. Ghana, therefore, supports the call for debt-for-climate swaps, which will address a multitude of issues in one fell swoop.”

He, thus, urged world leaders to use COP 26 as “a turning point to create a more prosperous, greener and fairer world, which maintains the balance between the social, economic and environmental requirements of all nations of the earth, rich and poor.”

Success, in this endeavour, he reiterated, is the greatest inheritance the world can leave for current and future generations.


Protecting Ghana’s Forests and Oceans
President Akufo-Addo also participated in the World Leader’s Summit on protecting the world’s forests and oceans, held on the sidelines of COP 26.

Describing deforestation and forest degradation as the “greatest challenges to sustainable forest management” in Ghana, the President stated that Ghana has, in the course of the last two decades, adopted several policies and programmes, such as National Forest Plantation Development Programme and the Ghana Forest Plantation Strategy, aimed at restoring her lost forest.

“In June this year, I led the entire country, through the Green Ghana Project, to plant over seven million trees, far above the five million we had targeted. Next year, we aim to plant a minimum of twenty million trees, and we have already begun earnest preparations towards this,” he added.

The President Assured that “from 2024 and beyond, we aim to reduce emissions by some ten million tonnes of carbon dioxide equivalent in the cocoa-forest landscape, through the implementation of the Ghana Cocoa Forest REDD+ Programme, one of five ecological landscape-tailored programmes in Ghana’s REDD+ Strategy.”

Ghana, President Akufo-Addo stressed, through her Nationally Determined Contributions in the forestry sector, “is committed to supporting the global target of halving emissions by 2030, and attaining neutrality by 2050”.

Reiterating Ghana’s commitment to managing sustainably her ocean, as the historic Transformation Document that was launched in December last year enjoins the country to do, the President added that the country is putting in place the requisite structures and processes to finalise her Sustainable Ocean Plan by 2025.

“The pressing threats we face are marine security, due to the prevalence of piracy and armed robbery on our seas, the mounting menace of Illegal, Unregulated and Unreported fishing (IUU), overfishing and its attendant decline in fish stocks, and plastic pollution,” he said.

As Ghana deal with these challenges, in partnership with the United Nations Division for Ocean Affairs and Law of the Sea, “we are also conducting an Ocean Governance Study to help us strengthen our legal and institutional framework for ocean management”.

In addition, the President noted that to help reduce the excessive pressure, over-exploitation and to replenish Ghana’s falling marine fish stocks, just as was done last year, he told the gathering that Ghana has implemented a closed season for artisanal and industrial finishing.

“The results have been a phenomenal success, and we intend to continue to implement this policy with huge positive dividends over the medium-term. We must leverage our collective political influence, build strong partnerships with business leaders and influencers in civil society to drive effectively the implementation of the Transformations Document by all countries,” he added.