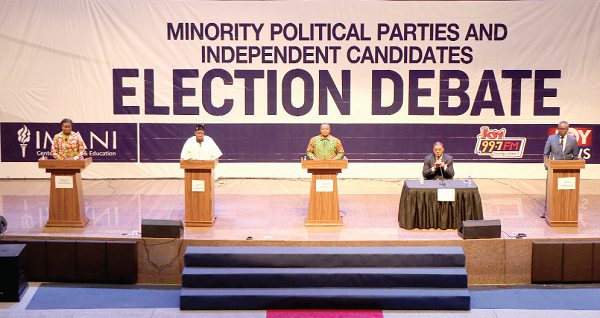 Five presidential aspirants have professed a myriad of policy alternatives that they say will propel economic growth and sustainable development in the country.

They made the policies known when they engaged in a presidential debate organised by the IMANI Centre for Policy Education at the University of Professional Studies (UPSA) in Accra last Thursday.

All of them pledged to provide long-term financial support and low-interest rates to entrepreneurs and local businesses to help them expand and provide jobs for the unemployed.

Although the Electoral Commission is yet to endorse the candidature of any of the aspirants, the debate, according to its organisers, was to offer a window to the public to have a sneak peek of the policies and governance structure that each aspirant was imbedded with.

The flag bearers who engaged in the debate included Mr Hassan Ayariga of the All People’s Congress (APC), Mr Ivor Greenstreet of the Convention People’s Party (CPP) and Ms Brigitte Dzogbenuku of the Progressive People’s Party (PPP).

The rest were the flag bearers of the People’s National Convention (PNC) and the Liberal Party of Ghana (LPG), Mr David Apasera and Mr Kofi Akpaloo respectively.

They explained various policy interventions they would implement to make corruption unattractive and mete out severe sanctions to offenders.

The presidential aspirants answered questions on the economy, governance, corruption and provided alternative solutions on how they would manage the incidence of crime and ensure law and order in the country.

In his remark, the flag bearer of LPG Mr Akpaloo, pledged to establish a $10 billion job fund to create sustainable jobs for all.

The fund, he said, would provide long-term funding to businesses and entrepreneurs to expand and provide jobs for Ghanaians.

Mr Akpaloo said under his leadership, the country would borrow both locally and internationally to expand the economy and reduce the country's $39 billion debt stock.

He said the debt stock should not prevent the country from borrowing more because even the developed countries still owed trillions of dollars, with over 100 per cent debt to Gross Domestic Product ratio.

He said the country was in a leadership crisis and successive governments over the years had not used the loans secured from the Briton Wood Institutions and donor communities wisely.

Instead of borrowing, Mr Ayariga said his government would levy every Ghanaian GH¢8,000 to offset the country’s debts.

For his part, the flag bearer of the CPP, Mr Greenstreet, also said his administration would not borrow to develop the economy.

Rather, he said his government would develop entrepreneurial skills in areas with comparative advantages and add value to the country's natural resources.

On maintenance of law and order, Mr Apasera said he would establish a Paramilitary Unit and equip them with the necessary logistics to deal swiftly with highway crime.

Mr Apasera said he would introduce tougher measures to deal with corruption and discourage it entirely.

“I will order the shooting or hanging of corrupt public appointees if the measures instituted by my administration failed”, he said.

She said political leaders should stop interfering in law enforcement, and allow the security agencies to enforce the laws.

To help the economy grow, Ms Dzogbenuku said there was the need to support local farmers with requisite financial support to expand and increase production, rather than spending resources to import basic food items such as rice.

She said under her leadership, the country would invest in local industries to add value to the natural resources to create sustainable jobs for all Ghanaians.
#GhanaVotes2020