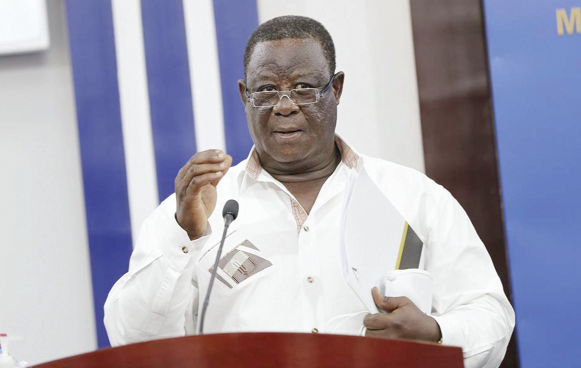 The government is to construct three interchanges and a number of footbridges for pedestrian crossings on the Accra-Tema motorway.

This is to ensure the safety of motorists and pedestrians who use the motorway and communities along the route.

The Minister of Roads and Highways, Kwasi Amoako-Attah, made this known in Parliament last Friday.

It was in response to a question by the National Democratic Congress (NDC) Member of Parliament (MP) for Buem, Kofi Adams, to know the urgent steps the Ministry of Roads and Highways was taking to improve the safety of motorists on the Accra-Tema motorway and the communities along that route.

Responding to the question, Mr Amoako-Attah, who is also MP for Atiwa East, said there were plans to also expand the existing four lane motorway into a 10 lane.

This, he said, would comprise four lane freeway (access control), three urban highways, three interchanges and a number of footbridges for pedestrian crossings.

He said all the safety measures for motorists and pedestrians have been incorporated into the designs for the expansion works on the motorway.

He stated further that the urban highways and the interchanges to be constructed would serve the communities along the road.

He said the Lakplaku Bridge that was closed to traffic for rehabilitation works has since been opened to traffic last Friday, saying all formed part of efforts by the government to ensure safety on the motorway.

Responding to another question by the NDC MP for Salaga South, Zuwera Mohammed Ibrahimah, as to when the Makango-Salaga and other roads under construction in her area would be completed to ease the transportation challenges of the people, Mr Amoako-Attah said the progress of work on the Makango-Salaga road to date was 25 per cent.

He said the Makango-Salaga road was being constructed under the contract titled " Rehabilitation of Tamale-Salaga-Makango which was 52 kilometres long.

On the Abromase-Akamade, Abromase-Kigbatito, Steel Bridge-Sarikingonakura, Abromase-Kijawu Battor, Salaga-Dagoubia and Takpu-Silmunchu feeder roads within the Salaga and Akamade enclave in the East Gonja Municipality in the Savannah Region, Mr Amoako-Attah said some of the roads were partially engineered while others were in poor surface conditions.

He said currently there was no programme on any of the above mentioned roads .

Mr Amoako-Attah, however, said engineering design and condition surveys had been carried out on the roads for upgrading interventions.

He stated that the procurement and execution of the interventions would be considered under the 2023 budget.

On when the contractor working on the Japekrom to Kwameoseikrom road will return to site after abandoning the road project for several months, a question by the MP for Jaman South, Williams Okofo-Dateh, the Roads and Highways Minister, said the Department of Feeder Roads would carry out a reassessment of the contractor's capacity.

This, he said, was to find out if the contractor had the capacity to execute the works so that the future of the contract could be determined.

He said the contractor before abandoning the work had undertaken a number of works which included clearing, formation, construction of U-drains and pipe culverts.

He stated that the contractor had achieved only 30 per cent of works and cited payment challenges as the reason for the delay.