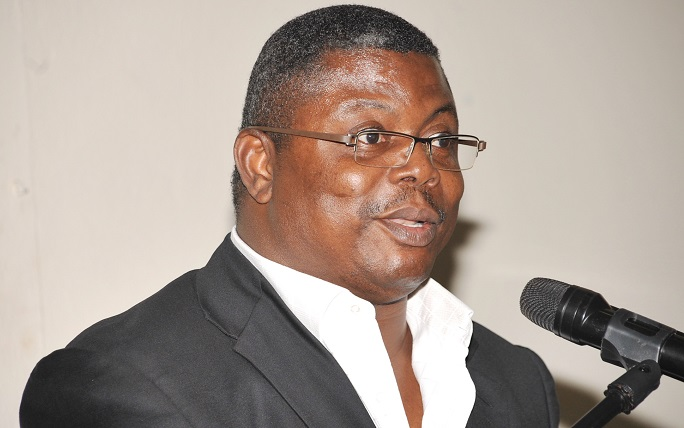 Rev. Richard Quayson, the Deputy Commissioner of CHRAJ, delivering his speech at the colloquium

Ghana loses more than $3 billion every year through corruption, the Deputy Commissioner of the Commission on Human Rights and Administrative Justice (CHRAJ), Rev. Richard Quayson, has said

amount is said to be about 300 per cent of all the aid it receives in the same period, according to a study by IMANI which looked at procurement losses in the reports of the Auditor General between 2012 and 2014 and compared it to the aid received by the country.

The loss of money through corruption is usually in the area of public procurement, with public officials inflating contract prices for the provision of goods or services.

Rev. Quayson, therefore, challenged the public service to heed the clarion call by President Nana Addo Dankwa Akufo-Addo of a Ghana beyond aid, avoid corrupt practices and work towards the goal, since it was achievable.

The colloquium was to mark the Public Service Day, which is commemorated on June 3 by the United Nations (UN), as well as the African Union (AU).

The year 2018 has also been designated as the AU Year of Anti-Corruption with the theme: “Winning the fight against corruption: a sustainable path to Africa’s transformation."

The AU celebrates the day biennially. However, member states are to celebrate the day yearly, and the partners in Ghana chose June 29 to organise a colloquium on the theme, “Combatting corruption in the public service institutions through stakeholder participation and promotion of ethical leadership to realise the objectives of Agenda 2063 and the SDGs.”

Rev. Quayson indicated that the public service was the lifeblood of all successful countries, adding that all societies needed quality public service for development.

“How are the public services of African countries responding to their call to duty?” he queried.

For him, while office was one of trust, currently all that public officers did was for their personal interest.

Rev. Quayson said the image of the public services had suffered very badly, with the loss of most of the important values of public service and the tolerance of corruption, nepotism and partisanship taking over service.

He noted that information about some of the expenditure made in the name of the people mind-boggling.

“How is it possible that the African Development Bank (ADB) can construct a 150-bed hospital in Accra at the cost of less than $3 million, and yet when the Ghana government constructs a 60-bed hospital in the district, it costs the nation more than $25 million. How” he asked rhetorically.

He urged all public workers to take deliberate steps to fight corruption and the plundering of the wealth and resources of the people on the continent.

“Africa and Ghana are not poor. It is poor leadership and negative attitude that impoverished us and developed in us the mentality that we cannot do it on our own,” he pointed out.

He proposed the National Anti-Corruption Action Plan (NACAP) as the viable strategy for all to work in concert to achieve change, a country free of corruption and a continent set on a sustainable development path.

“Under NACAP, Ghana has put together the difficult, but necessary decisions and actions to build a free and just country where human rights and human dignity is promoted...” he added.

Professor Bill Buenar Puplampu, who was the guest speaker at the colloquium, did not mince his words when he described corrupt people as ‘witches and wizards’.

According to him, corrupt people circumvented laid-down procedures and by that rebelled against the state.

He observed that all those engaged in grand corruption in Ghana were arrogant to the highest level.

“For me, the corrupt and those who misbehave in that way are thieves of the state, they are fakes, they are phoneys and they are fools,” he told his audience.

Prof. Puplampu was of the view that corruption was endemic in the country because it had been redefined as normal and made and, therefore, Ghanaians were no longer worried or frightened by it.

As an antidote, Prof. Puplampu prescribed the normalisation of professionalism in public service and charged the heads of the public services to give their clients credible charters simplified into specific behavioural actions and where to report infractions.