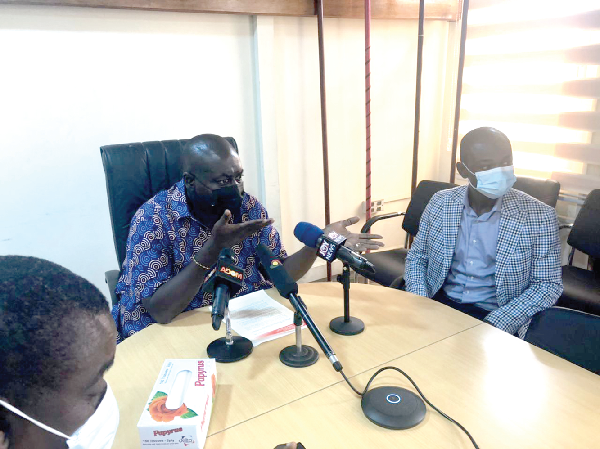 The Civil and Local Government Staff Association (CLOGSAG) has expressed concern about what it describes as interference in the work of the Local Government Service by the Western North Regional Minister, Mr Richard Ebbah Obeng.

At a press conference in Accra yesterday, the Executive Secretary of CLOGSAG, Dr Isaac Bampoe Addo, accused Mr Obeng of posting two workers of the local government service out of the the Western North Regional Coordinating Council “in contravention of existing procedure for posting.”

That, he said, had been upheld by the Supreme Court in a 2017 decision in the case of CLOGSAG v A-G.

In that case, the apex court held that “no civil servant must owe, or be seen to owe, appointment or promotion to partisan activities since visible partisanship by civil servants and would severely impair, if not destroy, public perception of neutrality”.

Dr Addo explained that the neutrality of the civil and local service meant that politicians had no right to meddle or interfere in the promotion, posting or any other issue relating to civil or local government servants.

“Mr Richard Ebbah Obeng has erroneously arrogated to himself the power to post officers of the Local Government Service.

He has also directed his personal assistant to lock up the office of one of the two officers who had been posted by the Regional Minister,” he added.

So, for fairness, his appointment should be terminated immediately" he said.

Dr Bampoe Addo therefore, called on President Nana Addo Dankwa Akufo-Addo to terminate the appointment of the Regional Minister for the said interfernce

The Association has also given the Regional Minister up to Friday, November 26 to rescind the decision to post the two workers.

“CLOGSAG wishes to serve notice that, if by Friday, 26th November, 2021 the postings have not been reversed, the association would be compelled to convene an Emergency National Executive Council (NEC) meeting to pave way for further action,” Dr Addo said

Efforts by the Daily Graphic to get Mr Obeng to respond to the allegations proved futile as phone calls and messages sent to him were unanswered.