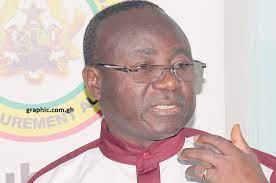 The Commission on Human Rights and Administrative Justice (CHRAJ) has directed a former Chief Executive Officer (CEO) of the Public Procurement Authority (PPA), Adjenim Boateng Adjei, to refund GH¢5.7 million to the state.

The amount is to be paid into the Consolidated Fund within six months and the receipt evidencing the payment produced before the commission, “failure of which the commission shall take the necessary action to recover the money from Mr Adjei's known properties and assets.”

Consequently, CHRAJ disqualified him from holding public office for not less than 10 years, to run concurrently with the earlier disqualification in the decision of the commission in the case of Office of the President (OOP) vrs CEO of PPA.

“Having abused public office to illicitly enrich himself, Mr Adjenim Boateng Adjei has demonstrated that he can no longer be entrusted with public office. Consequently, the commission hereby disqualifies him from holding public office for a period not less than 10 years,” CHRAJ said.

Adjei was also directed to declare his assets and liabilities within three months.

CHRAJ disqualified the Board Chairman, Professor Douglas Boateng, and a member of the board, Dr Emmanuel Yaw Boakye, from appointment to chair or be a member of any public board, council or commission for two years and three years, respectively.

The directives are contained in a 162-paged new report, dated February 11, 2022, on a second investigation CHRAJ conducted into the activities of Adjei following the “Contract For Sale” scandal.

The investigation was as a result of a complaint on October 4, 2019 by the Ghana Integrity Initiative (GII), the local chapter of Transparency International (TI), for Adjei and the then members of the Board of PPA and officials of Talent Discovery Ltd (TDL) to be investigated on issues of conflict of interest, corruption, illegal acquisition of assets and non-declaration of assets and liabilities, which contravened the Constitution.

The findings of the report revealed unexplained wealth in various bank accounts of the former PPA CEO within two years in office, especially when he had stated himself that he was not receiving salary or income from any of the known sources.

He had also admitted that he had not declared his assets and liabilities to enable the commission to determine what he was worth before assuming public office.

“Mr Adjei received huge cash deposits into his Universal Merchant Bank Cedi account between August 2017 and August 2019, amounting to GH¢5,697,530, (less GH¢86,000) paid by Device Ltd) while he was holding public office as CEO of PPA.

The report stated that although he was given every opportunity to rebut the presumption that those assets were not illegally acquired, contrary to section 5 of Public Office Holders (Declaration of Assets and Disqualification) Act, 1998 (Act 550), he was unable to show that those amounts were reasonably attributable to income, gift, loan, inheritance or any other reasonable source and, therefore in contravention of the Constitution. .

CHRAJ also investigated the board members and made no adverse findings except against two.

Two TDL officials, Messrs Francis K. Arhin and Thomas Amoah, were also investigated but the report did not provide details of findings against them because they are the subject of other investigations.

CHRAJ's investigation was mainly on the allegations of conflict of interest and abuse of office, assets declaration and contravention of Article 286(4) of the Constitution.

The allegations of corruption, sale of contract and others not specifically dealt with in the CHRAJ report were matters that the commission indicated were receiving the attention of the Office of the Special Prosecutor and the Economic and Organised Crime Office (EOCO).

The report indicated that Professor Boateng failed to declare his assets and liabilities, as required by Act 550.

His excuses for not declaring his assets and liabilities were considered not reasonable, for which the commission had directed his disqualification from public boards or councils.

For Dr Boakye, he put himself in a position where his personal interest conflicted with the performance of the functions of his office as a member of the PPA Board, the report said.

CHRAJ explained that the disqualification of the two should be limited to public boards, councils and commissions and should not extend to public office generally.

The commission also gave Prof. Boateng three months to provide evidence before the commission that he had complied with Article 286(1)(c) of the constitution.

The commission found that procurement entities using the restricted tender method, which by law must apply to the PPA for approval and provide justification for using the method, did not do so, yet same entities were approved by the board.

“The PPA is directed to pay closer attention and ensure the practice does not recur.

It also called for the need to strengthen the compliance of public officers to declare their assets, in conformity with Chapter 24 of the constitution.

CHRAJ commended the GII for the public spiritedness exhibited by submitting the complaint.

In a press statement, the GII commended CHRAJ for a dispassionate and thorough work done..

The anti-graft NGO called on the OSP and EOCO to fast-track the criminal investigation aspect of the case and hold accountable persons who would be found culpable.

A journalist, Manasseh Azure Awuni, and a team, on August 21, 2019, aired a documentary titled "Contracts for Sale".

Following the broadcast, the President, Nana Addo Dankwa Akufo-Addo, immediately suspended the CEO of the PPA and subsequently referred the allegations of conflict of interest in the documentary to CHRAJ and that of corruption and sale of contracts to the Office of the Special Prosecutor (OSP) for investigations in respect of their mandates and appropriate action.

The particulars of the complaint from GII included the fact that Adjei established companies, including TDL, soon after he became the CEO of PPA and used his public office for private gain, and that the companies sub-let or sold government contracts to other contractors and suppliers, enriching himself illegally.

The GII requested for him, together with board members who could have been involved in the deals, as well as officials of TDL, to be investigated in order not to allow any person benefit from the illegal wealth they might have acquired through corruption and the money retrieved.