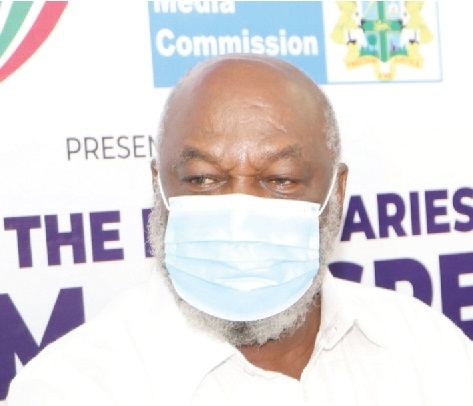 A communications expert, Professor Kwame Karikari, has stressed the need for Ghanaians to demand from owners of media organisations, rules of conduct and engagement, so that their journalists carry out their duties as professionals.

In addition, he said, the associations of media organisations, for instance, the Ghana Independent Broadcasters Association (GIBA) and the Private Newspaper Publishers Association of Ghana (PRINPAG), should state clearly the professional code of conduct for the industry to serve as a guide for their members.

That, he maintained, would help promote professionalism in the media space and curb the spate of recklessness and abuse of press freedom being recorded currently.

Speaking at a roundtable on exploring the boundaries of freedom of speech in Accra last Friday, Professor Karikari said: “There's been too much recklessness and abuse of press freedom. There is too much unprofessionalism and a lot of citizens are insulted and abused and journalists go scot-free. But we do not have an effective regulatory system in the newsroom, industry or national level, to check unprofessionalism in the media.”

The roundtable was organised by the National Media Commission (NMC), in collaboration with Citi FM and Citi TV, a broadcast media organisation in Accra.

Other panelists were a private legal practitioner, Ace Annan Ankomah, and the Executive Secretary of the NMC, George Sarpong, with submissions from the Chairman of the NMC, Yaw Boadu Ayeboafoh, and the President of the Ghana Journalists Association (GJA), Affail Monney.

Prof. Karikari, who is the immediate past Board Chairman of the Graphic Communications Group Limited, indicated that radio stations that were there for political parties were not practising professional journalism but were propaganda tools.

Among other things, he indicated that professionalism did not consist of propaganda or using the media for a section of society to gain political power because that involved political interests.

Attached below is a playback of the discussion.

Prof. Karikari, who is a former Executive Director of the Media Foundation for West Africa (MFWA), said professional journalism involved the watchdog role of the media.

“Journalism takes sides when the matter is of public interest, when it is about social justice, peace and the welfare of the entire community.

“So if a media house engages in a campaign for consumers, it is serving the public because it wants consumers to have a good deal from the people whose goods and services they consume.

“If a media house goes on to campaign against corruption, it is because corruption does not inure to the benefit of the people,” he emphasised.

Prof. Karikari further explained that there could be watchdog journalism, which clearly would be in the public interest, targeting a particular issue that was inimical to
society for everybody to see.

“That watchdog journalism is not a campaign for the aggrandisement of the individual journalist or the news organisation but to cure a certain ill in the public space for
the welfare of society.”

Making his submission on the legal implication of freedom of speech, Mr Ankomah said no rights were absolute, since they were subject to limitations, and, therefore, reminded all that free speech, free expression and free press "may yet have civil and criminal consequences”.

"There are limits to the rights of free speech, and the Constitution itself provides for that. The entire Chapter 12 is dedicated to freedom of the press, yet it says that freedom is subject to laws reasonably required in the interest of national security, public order, public morality and for the purpose of protecting the reputation, rights and freedoms of other persons."

Mr Ankomah stressed that although the Criminal Libel Law might have been repealed, there were 40 others that could get people into trouble if they carried those out in the name of ‘freedom’.

“Press freedom means nobody should interfere with anybody in efforts to express himself or herself. After you express yourself, you must bear the responsibility for the consequences of that expression,” he said.