Build consensus on use of Ghana Card - Bombande to EC 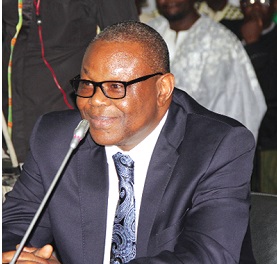 A conflict resolution and peacebuilding expert, Emmanuel Bombande, has reiterated the need for the Electoral Commission (EC) to ensure that a consensus agreement between all parties is reached before they implement the idea of using the Ghana Card as the sole form of identification for the upcoming limited voter’s registration exercise.

He said if consensus on the use of the Ghana Card as proof of citizenship to enable people to get their names on the voter register was not reached among major stakeholders, including opposition parties, before it is rolled out, it could breed tension in the 2024 general elections.

He explained that issues of citizenship had played a major factor in many conflicts in Africa and that Ghana needed to tread cautiously in order not to disturb the relative peace of the country.

Mr Bombande, who is also a co-founder of the West Africa Network for Peacebuilding (WANEP) and Executive Director Emeritus, made the remarks during a panel discussion at the National Forum on trending conflict issues in Ghana organised by the Ghana Catholic Secretariat (GCS) in Accra last Tuesday.

The forum was held under the auspices of the Sahel Peace Initiative (SPI), a peace-building project being rolled out by the Catholic Church with funding from the Catholic Relief Services (CRS).

The EC in a Constitutional Instrument (C.I) yet to be laid before Parliament has proposed the use of Ghana Card as the sole identification document for the upcoming limited registration exercise.

The decision by the EC has brought to the fore concerns by some stakeholders in the electoral process that making the Ghana Card the only form of identification for the registration exercise would lead to the disenfranchisement of many eligible voters.

Notable among the stakeholders that have raised concerns about the use of the Ghana Card is the main opposition National Democratic Congress (NDC).

Mr Bombande noted that consensus building was key to ensuring transparency in the country’s electoral system, hence the need for the EC to engage with all stakeholders in the electoral process for consensus to be reached on the matter before it was rolled out.

The conflict resolution expert also cautioned that the gradual eroding role of the Inter Party Advisory Committees (IPAC) in mediating electoral disputes could spell doom for Ghana’s democracy if not checked.

He said IPAC had over the years played a significant role in sustaining the country’s democracy by mediating electoral disputes.

He said, however, that in recent times, the role of IPAC had been relegated to the background; a situation he said should be of concern to all stakeholders who have interest in Ghana’s democracy.

Mr Bombande expressed concern that the relationship of the EC and some political parties, particularly the main opposition party, NDC, had not been the best in recent times.

For him, IPAC presented opportunity for both the EC and the political parties to iron out issues that could hinder fair and transparent elections.
He said, “The role of mediation of election has reduced and so there is so much tension.”

IPAC was formed in March 1994 to bring together representatives of the political parties on a monthly basis with members of the EC to discuss and try to build a consensus on electoral issues.