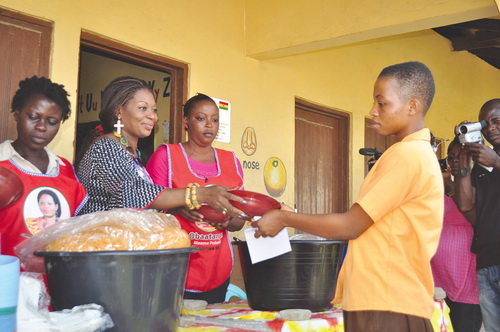 The Member of Parliament for Agona East in the Central Region, Mrs Queenstar Maame Pokuah Sawyerr, has feted candidates taking part in the ongoing BECE examinations.

The about 1,403 final year school pupils from both public and private schools, including invigilators and supervisors would be provided with free meals daily during the six days the exams would be written.

Addressing the media during a tour of the four examination centres, namely, Kwanyako Senior High School, Mankrong Junction ADA, Nsaba SHS and Swedru Senior High School, Mrs Sawyerr, who is also the Deputy Central Regional Minister, said that as an individual who was child-centred, she thought it wise to provide one of the basic necessities of life, which is food to the students.

She noted that she had been a child before and knew what children go through and that considering the level of poverty and deprivation in the Agona East district, the provision of food for the school pupils during the exam period would ease the pressure on parents during such a period.

According to her, her two top most priorities she would want to fulfil during her four-year tenure, were education and extension of electricity to communities.

She added that there was falling standards of education in the district and would do everything possible to help improve it.

She stressed that she was not concerned about the cost of  feeding them, but that she was more committed towards improving their welfare.

She urged them to be disciplined in order to pass the exams so that they could benefit from the CAMFED scholarship that would sponsor students who would pass the exams up to the tertiary level.