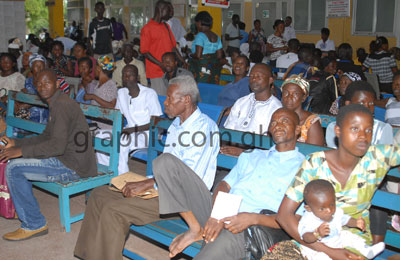 The decision of members of the Ghana Medical Association (GMA) and the Government Hospital Pharmacists Association (GHOSPA) to embark on a strike is already biting hard on the health sector, with patients being turned away from public health facilities across the country.

While many of the patients started leaving the hospitals around 10 a.m. when they heard about the industrial action, others were still glued to their seats, hoping that some of the doctors would be sympathetic enough to attend to them.

Patients with chronic diseases who had brought their prescriptions to collect their medications were also stranded following the closure of the pharmacies.

The strike, which took off yesterday, saw the doctors withdrawing all out-patient services at the health institutions, attending to only emergency and in-patient cases at the public health facilities.

The GMA has, however, indicated that if its grievances are not immediately addressed, it will eventually suspend all emergency services on April 15.

Patients who turned up at the health centres left disappointed, as doctors declined to attend to new cases that were not emergencies.

Contrary to expectations, on the first day of the strike, the 37 Military Hospital and the Police Hospital did not reel under the pressure which comes with the influx of patients from public hospitals.

Accra
At the Korle-Bu Teaching Hospital (KBTH), even though the usual buzz was at the central out-patients department (OPD), some patients expressed dissatisfaction at not being attended to, even though they had been at the hospital very early in the morning, writes Seth J. Bokpe.

“I have been here since 7 a.m. but the nurses said I cannot see a doctor because they are not taking new cases. This is not fair. I can’t afford a private hospital bill,” a patient, Janet Amankwah, said as she pulled out her National Health Insurance Scheme (NHIS) card.

The strike notwithstanding, by 10.15 a.m there were long queues of patients getting in and out of consulting rooms at the hospital.

A junior doctor who asked not to be named said, “Most of the senior doctors are not at post. For now we are just attending to patients who booked appointments earlier and emergency situations.”

There was no sign of life at the hospital’s pharmacy.

Unlike Korle-Bu, the OPD of the Ridge Hospital was near empty. There were about six people sitting around and waiting for attention at the time the Daily Graphic visited the facility.

Even though the hospital’s pharmacy was opened, there was nobody serving patients.

A nursing mother told the Daily Graphic that she arrived at the hospital at 9 a.m. with her sick eight-month-old son who was attended to but there was nobody at the pharmacy to serve her.

When the Daily Graphic reached the Police Hospital, the various consulting rooms were alive with patients going in and out.

The Public Relations Officer of the hospital, ASP Juliana Obeng, told the Daily Graphic that the hospital had put in place contingency measures to contain the situation.

Among the measures being rolled out are a recall of all medical staff on leave, increasing observation beds at the OPD by 80 per cent to take in more patients, opening  an emergency resuscitation unit and a surgical theatre at the OPD to be properly equipped if the strike continues and activating a mobile emergency unit should the need arise.

Interestingly, however, a patient who arrived at the Police Hospital could not be admitted because there was no bed. She was, however, admitted at the 37 Military Hospital.

The situation was no different at the 37 Military Hospital, as the various OPDs were virtually empty.

The Public Relations Officer of the hospital, Ms Paula Ahema, told the Daily Graphic that to contain the situation, all medical staff on leave had been recalled.

Additionally, while all leave applications had been suspended, there would be a quick discharge of all nursing mothers who delivered without complications and did not need special attention to create more room at the maternity ward.

The government has given an indication that it will resource the 37 Military Hospital and the Police Hospital to handle the crisis, but Ms Ahema said the hospital was yet to receive the supplies.

At the Tamale Teaching Hospital (TTH), the Public Relations Officer, Nii Otu Ankrah, said as a temporary measure to contain the strike, the management was employing the services of physician assistants, reports Zakaria Alhassan.

“We are also relying on the services of pharmacy technologists in administering drugs to patients, since pharmacists have also embarked on strike for a redress of their grievances,” he stated.

At both the Central and the Zogbeli hospitals, some of the patients made passionate appeals to the doctors to rescind their decision and return to work while they negotiated for the speedy resolution of their grievances.

From Sunyani, Samuel Duodu reports that in spite of the strike, patients who called at the OPD of the Sunyani Municipal Hospital yesterday received medical care.
A visit to the OPD revealed that there were three Cuban doctors, two medical assistants and two pharmacists at post attending to out-patients, contrary to the withdrawal of OPD services by the GMA.

As of10 a.m. the hospital had attended to about 50 out-patients who had seen doctors at post and had gone in for their medicines at the pharmacy.

Following the industrial action by medical officers, stranded patients at the Komfo Anokye Teaching Hospital (KATH) made a passionate appeal to the government to find a lasting solution to the frequent industrial action by doctors to avoid casualties at the various hospitals across the country, reports George Ernest Asare from Kumasi

A 74-year-old patient, Opanin Kofi Boakye, who was at the KATH  Specialist Out-patient Surgery Department for a review, told the Daily Graphic that he had been discharged from the Accident and Emergency Unit of the hospital last Saturday.

Opanin Boakye,  who had been knocked down by a vehicle  two weeks ago at Barekese and suffered fractures on the legs and hands, said following the industrial action, he had not been attended to since he arrived at the hospital at dawn.

“I was here very early today, hoping that I will be attended to, but with the situation as it is now, I have no choice but to return home with these pains,” he lamented.

When the Daily Graphic visited the hospital, all the eight pharmacy shops had been closed down.

When contacted, the KATH Medical Director, Dr Baffour Awuah, said the hospital authorities were putting contingency measures in place to address all challenges that would emanate from the industrial action.

From  Koforidua, Nana Konadu Agyeman reports that doctors and pharmacists at the Eastern Regional Hospital in Koforidua stayed away from duty, except three doctors, including a male Cuban, who were seen attending to patients.

Two of the doctors seen at the OPD told the Daily Graphic that they had showed up at work because they were unaware of the strike taking effect yesterday.

“I only heard of the strike a day ago and never knew we were to stay away from duty,” a female physician seen attending to patients told the Daily Graphic.

A check at all the consulting rooms at the OPD revealed that it was only nurses who were on duty and taking medical records of the stranded patients, some of whom had travelled from various parts of the region to seek treatment at the facility.

However, at the Surgical Ward, it was only the Cuban doctor who was attending to old cases, while new patients with surgical conditions were spotted being given back their folders and turned away by the courteous nurses.

A visit to the Bolgatanga Regional Hospital on the first day of the strike revealed that health workers were at post rendering services, albeit on humanitarian grounds, writes Benjamin Xornam Glover.

Almost all the consulting rooms were occupied and clients were seen waiting for their turn to see the doctors on duty.

The Bolgatanga Regional Hospital has five doctors and two pharmacists, a situation experts say is far below standard.

Some patients at the OPD who spoke to the Daily Graphic praised the workers for opting to continue working and supporting healthcare delivery.

“Ours is a peculiar region. We are severally disadvantaged when it comes to the availability of doctors and other critical health workers. I want to believe that is why it becomes so difficult for the few medical doctors here to completely shut their doors to us. We salute them,” one Mr Benjamin Nsor said.

A visit to the Ho Municipal Hospital revealed that some patients who reported at the OPD in the morning were assured of medical care by a nurse on duty, except that they had to purchase or take their drugs in town, since pharmacists were also on strike, reports Emmanuel Modey.

According to Mr Jasper Ansong, the administrator of the hospital, some of the doctors were in the wards working, in addition to medical assistants, adding that the area was a peculiar place where they could not ignore the public just like that.

At the Ho Regional Hospital, the Medical Superintendent, Dr George Acquaye, said in spite of the unpleasant situation most of them found themselves in, the doctors had decided to take care of the in-patients and emergencies.

Dr Acquaye said that was to give the situation a human face in order not to lose innocent lives.