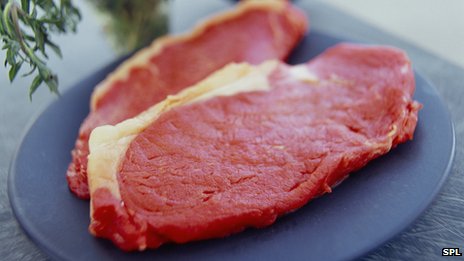 A chemical found in red meat helps explain why eating too much steak, mince and bacon is bad for the heart, say US scientists.

A study in the journal Nature Medicine showed that carnitine in red meat was broken down by bacteria in the gut.

This kicked off a chain of events that resulted in higher levels of cholesterol and an increased risk of heart disease.

Dieticians warned there may be a risk to people taking carnitine supplements.

There has been a wealth of studies suggesting that regularly eating red meat may be damaging to health.

In the UK, the government recommends eating no more than 70g of red or processed meat a day - the equivalent of two slices of bacon.

Saturated fat and the way processed meat is preserved are thought to contribute to heart problems. However, this was not thought to be the whole story.
"The cholesterol and saturated fat content of lean red meat is not that high, there's something else contributing to increases in cardiovascular risk," lead researcher Dr Stanley Hazen told the BBC.
Gut bugs

Experiments on mice and people showed that bacteria in the gut could eat carnitine.

Carnitine was broken down into a gas, which was converted in the liver to a chemical called TMAO.

In the study, TMAO was strongly linked with the build-up of fatty deposits in blood vessels, which can lead to heart disease and death.

Dr Hazen, from the Cleveland Clinic, said TMAO was often ignored: "It may be a waste product but it is significantly influencing cholesterol metabolism and the net effect leads to an accumulation of cholesterol.

"The findings support the idea that less red meat is better.

"I used to have red meat five days out of seven, now I have cut it way back to less than once every two weeks or so."

He said the findings raised the idea of using a probiotic yogurt to change the balance of bacteria in the gut.

Reducing the number of bacteria that feed on carnitine would in theory reduce the health risks of red meat.

Vegetarians naturally have fewer bacteria which are able to break down carnitine than meat-eaters.
Victoria Taylor, Senior Dietitian at the British Heart Foundation, said: "This is certainly an interesting discovery and sheds some light on why red meat might have an impact on heart health.

"While the findings won't necessarily mean a change to existing recommendations, these scientists have served up a good reminder for us to think about alternative sources of protein if we regularly eat a lot of red or processed meats."

Catherine Collins, a dietitian at St George's Hospital, said: "It's a very persuasive argument, but we know that eating a couple of portions of red meat weekly is of no risk, heart wise.

"There's no need to change our dietary recommendations from this - a Mediterranean-style diet with modest meat, fish, dairy and alcohol intake, coupled with more pulses, vegetables fruits, wholegrains and mono-unsaturated fats, remains the nutritional blueprint for a healthy and healthful life.

"But I would strongly recommend that unless you're a vegetarian or vegan, there is a potential risk from taking L-carnitine, lecithin, choline or betaine supplements in an attempt to ward off cognitive decline or improve fat metabolism.

"If the evidence is confirmed these supplements would do more to damage arteries than provide health benefits."
BBC