Use festivals to rally support for national development

President John Dramani Mahama has encouraged communities to use festivals to galvanise support towards the development of the country.

"Festivals should be used for stocktaking and reviewing of your development plans," he advised.

President Mahama gave the challenge on Saturday when he addressed a durbar of the chiefs and people of Enyan-Denkyira in the Ajumako-Enyan-Essiam District of the Central Region to mark the third annual Akwambo Kese Festival.

The festival, which is celebrated annually by the chiefs and people of the five traditional areas in the district, brought together the five paramount chiefs who have agreed that the annual celebration should rotate in their traditional areas.

It was heralded by traditional drumming and dancing. The chiefs and queens were also carried in their palanquins to signify the importance they attached to the festival.

President Mahama said the government, for its part, would continue to play its role by providing what was necessary to promote development. 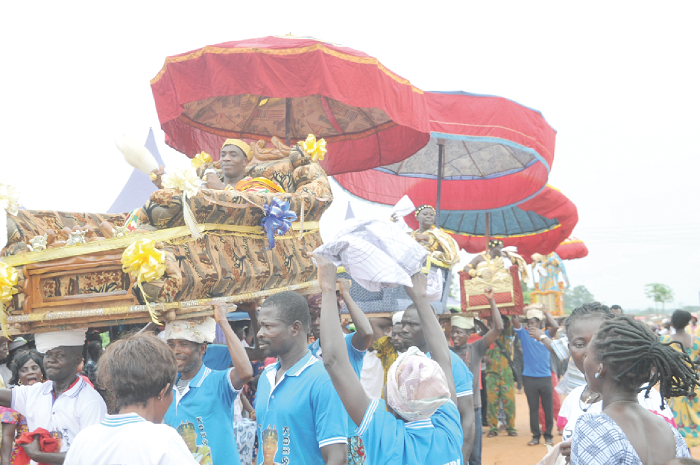 He said as communities, co-operation and peaceful co-existence was essential for their development and commended the traditional areas for creating a common platform that would enable them to share ideas and experiences on their development agenda.

The President also said the government was establishing a nursing training college at Ajumako Bisease, a district hospital at Ajumako, and reshaping a number of roads that would open up the place to commercial activities.

He said as a social democratic government, his administration would increase social interventions to make every citizen comfortable. That, he added, would be through support programmes that would empower every individual to undertake income-generating activities and support families that were very poor, under the Livelihood Empowerment Against Poverty programme.

On education, President Mahama said 49 educational projects were being undertaken in the district and gave an assurance that those projects would be completed to make education accessible to all the communities.

President Mahama said 39 communities had also been provided with boreholes to protect them from water-borne diseases.

Osabarima Otsibu VI, Paramount Chief of Enyan-Denkyira, host of the festival, commended President Mahama for the numerous development projects that were ongoing in the district, particularly the establishment of the nursing training school at Ajumako-Bisease.

He appealed to the Ministry of Chieftaincy and Culture to recognise the Akwambo Kese as one of the country’s major festivals.

Osabarima Otsibu also appealed to the Ministry of Tourism to assist the district to develop tourist sites such as; the hanging rock at Ajumako Nyinasu, the natural bell at Breman Essaim, natural lake at Enyan Akotogua and the museum at Ampia-Ajumako, to make them economically viable.

"We also wish to appeal to the government and the Ministry of Education to consider upgrading the Ajumako Campus of the University College of Education into a fully-fledged University of Languages," he added. — GNA