Use ban on drumming for farming — Agric Minister 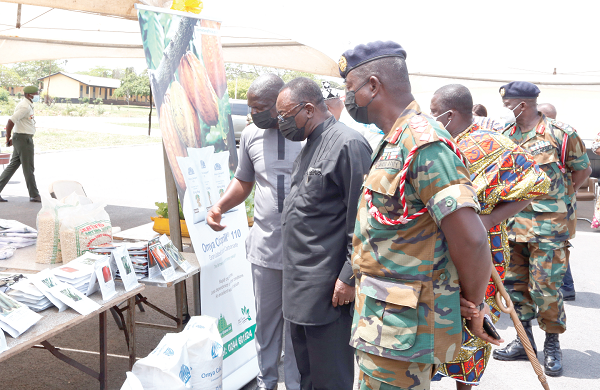 The Minister of Food and Agriculture, Dr Owusu Afriyie Akoto, has asked residents of the Greater Accra Region to observe the period between the ban on drumming and the celebration of the Homowo festival by taking to farming to help the region produce enough food.

The minister, who made the appeal at the launch of the, "Let's make agriculture flourish in Greater Accra" campaign at the Military Academy and Training Schools in Accra last Friday, said the campaign, which was also known as "Homowo goes green," was aimed at reviving the message and meaning of the ban and the celebration in line with government's Planting for Food and Jobs (PFJ) programme.

He noted that the history of the Ga Homowo festival was about ensuring food security and as such, the ban on drumming and noise-making was to enable the chiefs, priests and people of the region forgo merry making and concentrate on clearing their farms and get it ready for planting.

The minister said the meaning and significance of the ban, as well as names of certain suburbs of Accra, such as Abelenkpe (maize is last) emphasised that Accra in general used to be a food basket which needed a revival.

According to him, the campaign would be extended to all important festivals nationwide.

“Food farming is an honourable and lucrative business which should not be left to only a section of the people,” the minister said.

Touching on the Planting for Food and Jobs (PFJ) programme, Dr Akoto said the programme had not only saved the country from hunger, but had enabled the export of food to neighbouring countries in return for foreign exchange.

He revealed that the government's flagship programme, which started with 200,000 smallholder farmers barely four years ago, was now targeting some two million farmers this year and urged more farmers to join the PFJ.

"I urge more farmers to register in order to benefit from the subsidised prices of inputs and also increase harvest," Dr Akoto added.

The minister said beyond the Homowo goes green, the Greater Accra department of agriculture would support households, especially women and the youth, to produce and process selected vegetables to improve household nutrition.

“The project which is expected to cover all 29 districts of the region will focus on target crops, including vegetables such as tomatoes, pepper, onion, okro, cabbage and cereals such as maize and rice,” he explained.

Dr Akoto explained that series of training, home and farm visits would be undertaken by officials of the programme to the beneficiary farmers and farms to ensure that they applied good agronomic practices in their fields to produce quality crops.

The minister, who encouraged homeowners to take to backyard gardens, used the occasion to plant some maize seeds on parcels of land released to a group of farmers by the MATS.

Present at the ceremony were the Teshie Mantse, Nii Ashitey Akomfra who also planted some maize seeds; the Accra Regional Director of Agriculture,  Mr Eric Asameni; the Municipal Coordinating Director of the Ledzokuku Municipal Assembly, Ing John Tsikor; Commandant of the MATS, Maj General Charles Awity and other dignitaries.

Homowo is a harvest festival celebrated by the Ga people.

The festival, which is celebrated in the month of August, is preceded by the planting of maize, referred to as Nmaa dum, which will be used in preparing Kpokpoi or Kpekple to celebrate the festival.

During this period, there is a ban on drumming and noise-making in Central Accra, the ban is enforced for six weeks and lifted to prepare for harvesting and feasting during the celebration.

The festival is celebrated in remembrance of the famine that once happened in the history of the Ga people.