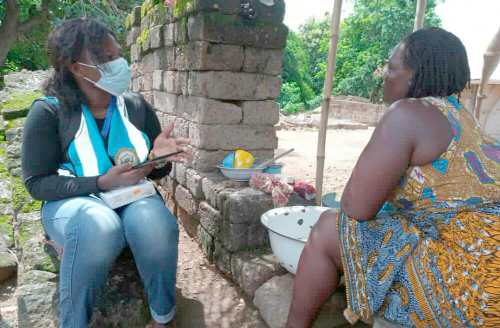 An enumerator (left) interacting with a woman in Ho to be counted
30.5k Shares

About four thousand census enumerators are combing every nook and cranny of the Volta Region to capture the details of people in the region.

Scores of enumerators were seen in various parts of the regional capital, Ho, engaging residents and collecting data when the Daily Graphic made some checks on how the census exercise which took off last Sunday was progressing in the regional capital.

Some of them had donned hats to protect themselves from the blazing sun, while field supervisors were also seen with them.

According to the Regional Director of the Statistical Service, Mr Christopher Amewu, no serious challenge had so far been recorded in the region.

He said no challenge had also been recorded with the use of the digital tablets.


However, the Daily Graphic team encountered some enumerators educating some residents who had refused to cooperate with them.

Some residents, who had indicated that the exercise was of no use to them due to outstanding developmental issues in their communities, had refused to be counted.

An enumerator told the Daily Graphic that although they had been adequately equipped on ways to handle such challenges, the magnitude of the challenges encountered on the field were overwhelming, despite efforts to educate residents who were uncooperative.

Mr Amewu, who confirmed the reports, said such recorded incidents were, however, few. He nonetheless appealed to the populace to regard the exercise as important and significant to their demands for development.

“It is better to be enumerated so you can be part of the country to make your call for development. Census involves everybody so there should not be excuses in cooperating with our enumerators,” he urged.

Some enumerators who spoke to the paper also lamented about encountering empty households.