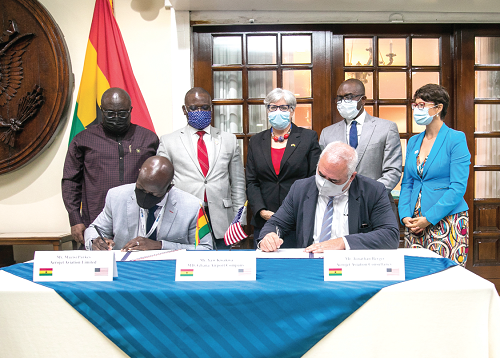 The United States Trade and Development Agency has awarded a grant of $1.2 million for a feasibility study on the development of an aircraft maintenance, repair and overhaul (MRO) facility at the Kotoka International Airport (KIA).

The MRO is an important step towards making the country an aviation hub.

The grant was made possible through a Ghanaian firm, Aerojet Aviation Limited, and its US counterpart, Alton Aviation consultancy.

The feasibility study, which will be conducted before the end of the year, will pave the way for construction work to begin on the project, which will serve as the first full-service aircraft MRO facility in West Africa.

The two firms yesterday signed an agreement to signal the start of the feasibility study in Accra.

The Chief Executive Officer (CEO) of Aerojet Aviation, Mr Mazisi Parkes, signed on behalf of his outfit, while the Managing Director of Alton Aviation, Mr Jonathan Berger, appended his signature for his company.

The US Ambassador to Ghana, Mrs Stephanie S. Sullivan, said the fund for the study was part of the effort to support the government’s agenda of making the country a regional aviation hub.

“In his June 16 address to the US Chamber of Commerce, President Nana Addo Dankwa Akufo-Addo made a case for US investment in Ghana and said that making Ghana a regional hub was a top economic priority. Having an MRO at the KIA will be an important step towards making that dream a reality,” she said.

The ambassador also said “no matter how minor or complicated the repair, airlines must repair their aircraft at a certified MRO in order for the aircraft to return to service”.

“Scheduled preventive maintenance must be completed by a certified MRO facility on every aircraft in active service. Having an MRO facility at the KIA presents Ghana with the opportunity to propel itself into a regional and global leader in the aviation sector and boost regional economic growth, safety, security and mobility,” she added.

The Deputy Minister of Transport, Mr Hassan Tampuli, said through collaborative effort, the vision of making Ghana an aviation hub would soon become a reality.

“I am informed that this assistance is part of a larger US government effort to respond to our quest to develop the aviation sector,” he said.

Mr Tampouli added that commercial aircraft maintenance activities were an integral part of airworthiness operations to ensure the safety and security of the aviation industry.

The Deputy Minister of Defence, Mr Kofi Amankwa-Manu, also said the project was relevant and  timely to support the government’s industrialisation drive.

West Africa does not have a certified MRO, despite being one of the regions where air traffic growth, prior to the COVID-19 pandemic in 2020, was on the ascendancy.

There are about 32 West Africa-based airlines serving in the region, with tens of international flights passing through various airports in the sub-region daily.

Airline operators in the sub-region have to fly to Ethiopia, Egypt or South Africa for regular maintenance of their aircraft.