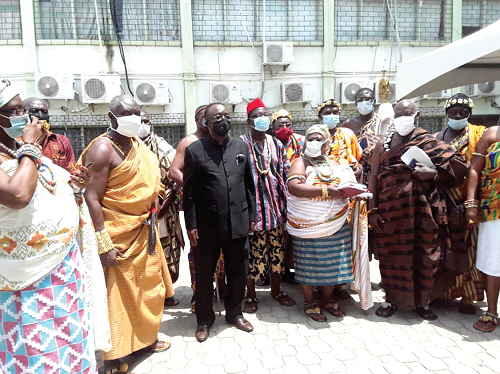 • Dr Owusu Afriyie Akoto (2nd left) with some of the chiefs after the ceremony
30.5k Shares

The chiefs and elders of the Tongu Traditional Area in the Volta Region have appealed to the Minister of Food and Agriculture to help revamp the Aveyime Rice project.

They have also called for the expansion of the Fieve Rice project to provide enough food and jobs for the people.

The President of the Tongu Traditional Council, Togbe Nakakpo Dugbaza VIII, made the appeal when he led the chiefs, elders and queenmothers from the traditional area to the Agric Ministry in Accra yesterday to congratulate the sector Minister, Dr Owusu Afriyie Akoto, on his reappointment.

The chiefs were accompanied by representatives of various farmer units in the area.

"We are glad to have you as the substantive Minister of Food and Agriculture for another four-year term," Togbe Dugbaza said.

They also called for the consolidation of the Planting for Food and Jobs (PFJ) initiative by the government.

He described the PFJ as "an agenda which is in the right direction and adored by us and our subjects”.

"We have always been happy with the way you and the government have used the PFJ to transform agriculture in the country," he added.

Togbe Dugbaza, however, reminded the minister that there was still more to be done, adding that the Volta Region had massive land resources for food crop production, especially rice, maize, cassava and vegetables.

He entreated the government to develop rice valleys and make rice production a lucrative business in the country.

“We believe in your ability and effort to effectively manage the agricultural sector,” Togbe Dugbaza added.

Dr Akoto said he was overwhelmed by the visit and gave an assurance that his reappointment was a testimony that he did a good job during his first tenure in office.

He thanked the chiefs for their show of solidarity and confidence in him and his team, saying he would focus on consolidating the gains made so far.

The minister also pledged to do more this year and said the Volta Region would be the first area he would visit.

Dr Akoto said the government was determined to assist the people to make farming a profitable venture.