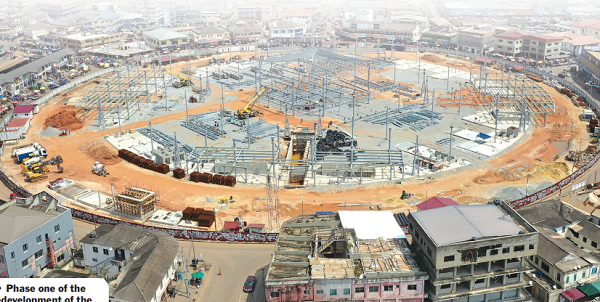 Phase one of the redevelopment of the Takoradi Market Circle is near completion
30.5k Shares

Work is progressing steadily on reconstruction of the almost a century old Takoradi Central Market in the Western Region, popularly known as the Market Circle.

Phase one of the redevelopment of the central market, which is being undertaken by an Italian contractor, Messrs Contracta Costruzioni Italia SLR, and is expected to be delivered by 2023, is about 73 per cent completed.

President Nana Addo Dankwa Akufo-Addo cut the sod for redevelopment of the Takoradi Market Circle in 2020. The project will cost €48 million and is being financed by an export credit from the Deutsche Bank S.p.A Italy, with export credit guarantee support from SACE, the Italian export guarantee agency.

The project is expected to be completed and delivered within 30 months.

The government’s decision to pull the market down and reconstruct was due to its weak nature. It was packed with improvised combustible materials, illegal electrical connections and traders flooding the space, thus making the entire central market dangerous and congested.

When the Daily Graphic visited the market, information made available indicated that on completion the new Market Circle will have 2,408 stores, 33 restaurants and food courts, and bulk breaking areas.

The facility will also have a visitors’ car park, offices, a police and fi re station, a post office, a clinic, administrative offices, day care centre, space for banks and other financial institutions, a waste separation dock and changing rooms for staff.

The new market will also be fitted with fire detection equipment and fi re-combating systems to address fi re outbreaks that were usual at the market and which is still fresh on the minds of the people.

The recent rains saw the build-up of floodwaters but the new facility has been incorporated with a drainage system, which is expected to be upgraded to alleviate flooding in the market and its environs.

Additionally, there will be improvements to social infrastructure, including toilets, sanitation facilities and health posts – every aspect of the modern market that would create the perfect ambiance for trading.

One of the features of the new market that traders and the public are happy about is the conscious effort to prevent traffic congestion in the areas that surround the market through the provision of on-site bulk breaking facilities.

The previous situation where such bulk breaking activities were done on the main Market Circle Road will be resolved through the provision of a designated area for bulk breaking.

Currently, the management of the SekondiTakoradi Metropolitan Assembly (STMA) has provided a temporary site for traders in the old Central Market even though that is not what the traders are looking for.

However, they take solace in the commitment of the contractor and government to get the work done on the redevelopment.

The Western Region Minister, Kwabena Okyere Darko-Mensah, who expressed his excitement about the progress of phase one, said: “Infrastructure forms an important driving force for economic growth.

It reduces trade and transaction costs and stimulates the productivity of the economy at the regional, district, municipal and national levels.”

He said a lot of projects were ongoing in the region, adding, “I can assure the public that these projects would be completed to ensure that we under the leadership of the President, Nana Addo Dankwa Akufo-Addo, continue to create the perfect atmosphere for our people.

“I am happy that today progress of work at the redevelopment site is more than 70 per cent, which includes engineering, procurement and construction works,” he said.

As the first phase progresses, he said, another proposal had been presented for the second phase and discussions were ongoing.

“Let me assure the people of Sekondi that the Sekondi Market was captured in the 2022 budget statement presented to Parliament pending processes leading to commencement,” he said.

The construction stage of the Market Circle project according to the statistics made available has created between 400 and 500 direct jobs and between 1,000 and 2,500 indirect jobs along the supply chain.

Some of the workers who are working directly with the construction workers were of the view that they were not only working for income but also the skills being transferred.

One of them who gave his name only as Kojo said: “After the market is fully completed, there will be the need for maintenance and we, with all the skills, will be in the position to be engaged or move with the contractor to another location.”

Currently, one of the main problemsaround the construction site is the infl ux of hawkers who have completelytaken over the streets around the round pavilion.

The traders are refusing to give way. Many of their businesses are on push trucks which have taken almost half of the double road, making it diffi cult for the free flow of vehicular traffic.

The managers of the assembly said they had plans to deal with the traders to ensure they did not pose a threat to the second phase.