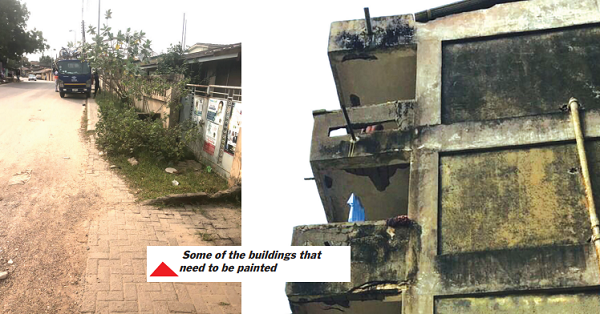 Some of the buildings that need to be painted Follow @Graphicgh

The Sekondi-Takoradi Metropolitan Assembly (STMA) has deplored the inability of property owners in the city to maintain their property by regularly painting then as stipulated in the bye-law.

The assembly said some buildings, both commercial and residential in the metropolis, were discoloured and had not seen paint for years, which must not be allowed.

At the launch of “Operation Paint Your Building”, a campaign to get all buildings painted in the SekondiTakoradi Metropolis, the managers of the city gave the assembly’s team three months to carry out the sensitisation.

The campaign is to create awareness of the need for homeowners and owners of structures to paint their buildings, failure of which attracts full sanctions enshrined in the bye-laws of the assembly.

“Let me remind us all that paragraph two of STMA’s Bye-law on maintenance of premises, 2017 states that – ‘A household or an owner or occupier of premises within the area of administration of the Assembly shall keep the house clean, white-washed and/or painted on regular basis at least once every five years,” he quoted.

The STMA, therefore, intends to enforce this section of the bye-law, as part of efforts to make SekondiTakoradi the smartest city and the cleanest in the country.

The campaign, as well as the moratorium for sensitisation, is a civic duty call to property owners to do the needful and the assembly has moved in to remind them of the provisions in the bye-law, since painting has the potential to change the face of the metropolis.

“Paint on a building or any structure is not only meant to enhance the beauty or the outward aesthetic look, but also ensures its longevity as much as possible,” he said.

As part of the awareness campaign, he said some information and education materials had been produced to explain and re-emphasise to stakeholders the need to support the exercise.

“The Sub-Metropolitan District Councils will also engage the residents’ associations, landlord/caretakers, leadership of religious groups and business associations within their jurisdiction on the need to paint their premises,” he said.

He said it was important for owners of buildings to know that paint was most often the first thing to attract attention, and “this shows the importance of external beauty or conditions of a building in creating an impression on individuals or organisations”.

Aside from the assembly having this in its bye-laws, painting protects the exterior of a building from the constant exposure to rains, scorching sun, high winds and many other external weather conditions.

“It is also important to note that when an unpainted building is exposed to moisture over a period, the concrete absorbs the moisture until it reaches the level of the underlying reinforcement bars in the structure of the building, thereby creating potential safety issues for lives and properties,” he said.

Mr Darko-Mensah urged owners of buildings in the metropolis, especially those along the ceremonial roads such as the Nkroful Junction to Apollo Highway, Takoradi/Accra Highway, Takoradi /Kwesimintsim Highway, as well as those in and around the Central Business District of Takoradi and Sekondi, to paint or repaint their properties.

“In as much as the campaign is targeted at the entire metropolis, buildings along the roads earmarked for reconstruction will be considered during the enforcement, in view of the anticipated impacts of the road construction works,” he said.

In the assembly’s quest to ensure smooth implementation of the exercise, he said the assembly was in the process of engaging a paint manufacturing company to sell to building owners in the metropolis at a discounted rate.

This will also ensure beauty and significantly contribute to the effort of promoting tourism in the metropolis. The main focus, he said, was to ensure that going forward the strategies would create a smart city – “the beautiful Sekondi-Takoradi we all want to see, it is a collective effort we must all work towards,” he charged residents.

“We are talking about a smart city that uses information and communication technology (ICT) to improve operational efficiency, share information with the public and provide a better quality of government service and citizen welfare – a city where owners take charge of their homes and keep them attractive and make the city beautiful,” he said.

“It is a known fact that at the centre of attention for each of these pillars in our quest to create the smart twin-city is the citizen – let us go get our houses painted,” he urged.

Decades of no painting

When the Daily Graphic drove through the city, it was obvious that some buildings for decades had not seen paint. Due to the closeness of the city to the ocean, many of the buildings are looking very bad.

Some tenants who spoke to the news team commended the regional minister for evoking the provision in the assembly’s bye-law that landlords should be made to paint.

Some of the buildings are so dilapidated it is as if there are no owners – “we want landlords to know that they are not to just enjoy the rent we pay but also use some to maintain the buildings.

“We pay rent to our landlords, but when you look at the structures we rented from them, they are very dirty and unattractive – it could be embarrassing sometimes,” one of the tenants who pleaded anonymity said.