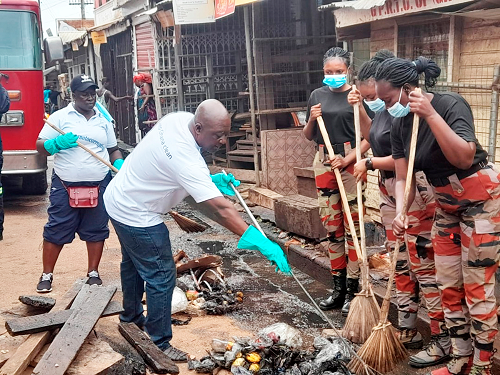 It was another successful day when stakeholders turned up to take part in the clean-up exercise organized to round up the Graphic/Zoomlion Sanitation Dialogue in the Bono Region at the Masom Masom stretch of the Main Sunyani Market.

Personnel from the Ghana National Fire Service (GNFS), staff of Zoomlion Limited, Graphic Communications Group Limited (GCGL) and a cross-section of the general public gathered at the market as early as 6:30 a.m.to begin the exercise.

Shops were closed while other trading activities came to a halt from the stretch where the exercise took place to enable the shop owners and market women to join the exercise.

The exercise was led by the Krontihene of the Sunyani Traditional Area, Oboaman Bofotia Boamponsem, who himself held a broom to sweep and changed over to a shovel to scoop the silt and other waste brought out of the gutters into wheel barrows before they were emptied into a skip loader provided by Zoomlion.

The entire half-kilometre stretch of the Masom Masom area of the Sunyani Main Market and the Taxi Rank were swept, while choked gutters were cleared after which personnel of the GNFS used their fire engine to clear the remaining debris in the gutters.

It was a delightful sight as Oboaman Amponsem, with the broom in his hand, moved from place to place to sweep to show to the people that no matter your status you have to join such exercises that could prevent the outbreak of diseases in the country.

Addressing traders who took part in the exercise, Oboaman Boamponsem reminded them that keeping the environment clean was a daily exercise and urged them not to wait until such clean-ups were organised before cleaning the environment.

He called on parents and teachers to inculcate in children the need to observe proper hygiene in order to sustain the country’s efforts to be the cleanest country in Africa.

“Children should know how to lay their beds and sweep their rooms and compound every morning”, he said and expressed regret that those virtues were gradually dying out.

While commending shop owners, food and vegetable sellers for taking part in the exercise, Oboaman Boamponsem called a cobbler, who was working while the exercise was going on, and chastised him and his colleagues for their negative attitude towards the exercise.

He warned that such negative reactions towards clean-up exercises to rid the town of filth in order to prevent the outbreak of diseases would not be tolerated.

To that end, Oboaman Boamponsem called on metropolitan, municipal and district assemblies (MMDAs) to enact bye-laws that would empower the police and other law enforcement agencies to punish sanitation offenders with spot fines.

For his part, the News Editor of the Daily Graphic, Mr Samuel Doe Ablordeppey, reminded the people that sanitation was a collective responsibility and urged them to ensure that their environment was cleaned every morning before they embarked on their trading activities.

He thanked the chiefs and people of Sunyani for their efforts to maintain environmental cleanliness and expressed the hope that the example set through the collaboration of Graphic, Zoomlion and other stakeholders would be a turning point in their attitude towards sanitation issues.

The Director of Communications and Corporate Affairs of Zoomlion, Mrs Emma Adwoa Apiah Osei-Duah, told the Daily Graphic earlier that Zoomlion had targeted to distribute one million waste bins to households and institutions throughout the country as part of efforts to curb indiscriminate dumping of refuse.

She cautioned against the misuse of the bins for purposes such as storage of water and clothing as well as corn dough, especially within the low-income communities, and explained that chips had been embedded in the new waste bins as a way to know wherever they had been kept.

Table top traders such as bread sellers and taxi drivers who spoke to the Daily Graphic appealed to the Sunyani Municipal Assembly and Zoomlion to place waste bins within the vicinity to provide travellers, sellers and buyers a means to dispose of their waste instead of indiscriminately littering.