Director of Prisons pulled out 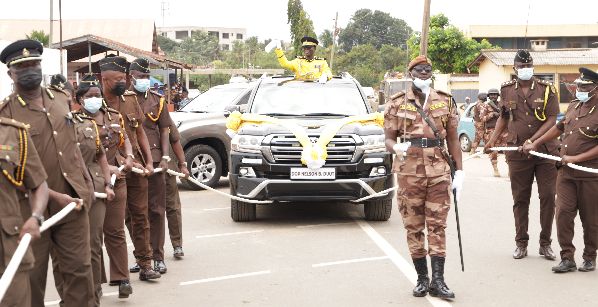 •Mr. Nelson B. Duut, Director of Prisons, Finance and Administration, acknowledging cheers from participants and family members during the pull out ceremony. Picture: EDNA SALVO-KOTEY

The Ghana Prisons Service (GPS) has organised a farewell ceremony for the immediate past Director of Prisons (DOP) in-charge of Finance and Administration, Mr. Nelson B. Duut, to officially mark his retirement from the service.

He was honoured with a parade which he inspected and presented with a citation, a plaque and an undisclosed amount of cash from the service for his 26 years of service, dedication and commitment as a prison officer.

As part of the pull out ceremony which took place last Friday, at the GPS Headquarters in Accra, ropes were tied to the front part of a vehicle in which he stood with his head and shoulders out through the open top, waving cheerfully at the crowd comprising service men in uniform, family, friends, among other people.

He was pulled out of the premises of the GPS Headquarters to symbolically depict his exit from the service.

The citation read in his honour stated that DOP Duut displayed a high level of professionalism, meticulousness and unblemished service to the GPS and the country as a whole during his years with the service.

“You have proven to be a reliable, resourceful and a committed leader with exceptional qualities. Your remarkable ability and display of exceptional managerial quality resulted in a re-branding, expansion and improvement of our infrastructure.

“As an astute officer, you instilled and maintained a high standard of discipline and performance among your staff and we are highly grateful to you,” the citation said.

DOP Duut began his career in the GPS on December 5, 1995 when he enlisted as a member of the officer Cadet Course Intake 13.

Upon successfully going through the training, he was commissioned into the senior officer corps as a Deputy Superintendent of Prisons (DSP), on July 5, 1996.

After commissioning, he was posted to the Prisons Headquarters as an Accountant and Procurement Officer.

In 2004, he was transferred to the Tamale Central Prisons as the Second in Command after having been promoted to the rank of a Chief Superintendent of Prisons in August, 2003.

He was later transferred to the Navrongo Central Prison as the Second in Command from 2007 to 2009 following his promotion to the rank of an Assistant Director of Prisons in 2006.

In 2017, he was appointed the Ashanti Regional Commander and Officer-In-Charge of the Kumasi Central Prison.

In February, 2021, he became the Director of Prisons in charge of Finance and Administration and held that position till his retirement.

In his remarks, DOP Duut expressed gratitude to the service for giving him the opportunity to serve the nation.

“As I stand here, I cannot think of any other career that could have been more fulfilling or rewarding than the Prisons Service. In fact, in the course of my career as a Prison officer, I have travelled and met wonderful people and made great friends across the length and breadth of this country and beyond the shores of Ghana.

“For this reason I feel greatly privileged and deeply touched, and will forever remain most grateful to the almighty God for how far he has brought me,” he said.

DOP Duut indicated that hard work, determination and good character were his major principles during his 26 years of service.

Such principles, he said, propelled him to reach greater heights during his time in the service.

He observed that many people sought after spiritual solutions to their problems while their greatest demon was their own character.

DOP Duut indicated that no matter where people placed prayer and supplication, character was also important.

“Actually there is no amount of spiritual penance that can substitute for character. Indeed, what ultimately destroys a man going to high places in life are not his many perceived enemies awaiting him there but rather his own character that accompanies him to the place,” he said.

He, therefore, encouraged both the senior and junior staff to work seriously on their character and attitude towards life.

That, Mr. Duut said, would enable them to achieve great successes in the service and also help them to maintain a good relationship with God.