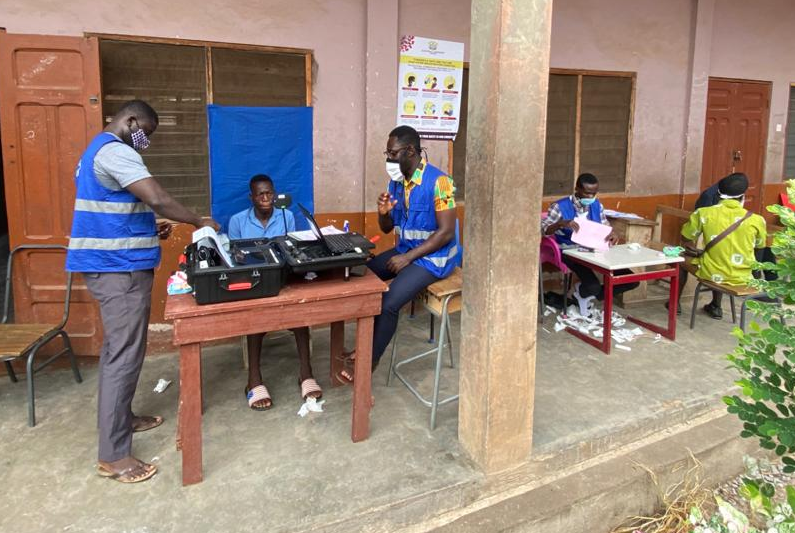 A shooting incident at the Ecole Jean Registration Centre at Kotobabi in Accra yesterday marred the second day of the voters registration exercise at the centre.

Three unidentified gunmen on motorbikes fired indiscriminately from some 100 metres away from the centre, sending prospective registrants running helter-skelter.

Briefing the Daily Graphic, the Public Relations Officer (PRO) of the Accra Regional Police Command, Deputy Superintendent of Police (DSP) Mrs Effia Tenge, said about 9.30 a.m. yesterday, there was indiscriminate discharge of firearms about 100 metres from the Ecole Jean Registration Centre at Kotobabi.

She said police investigations established that the shooting was done by three men on two unregistered motorbikes but they were yet to be identified.

She said the Member of Parliament (MP) for Ayawaso North, Mr  Yussif Jajah, later handed over three empty shells allegedly found at the scene of the shooting.

Mrs Tenge said the police were investigating the case, while efforts were being made to arrest the young men behind the shooting.

Adherence to COVID-19 safety protocols was still a challenge at some registration centres the Daily Graphic visited in Accra and Wa.

In Accra, Kester Aburam Korankye reports that prospective registrants who had gathered at the various centres ignored the wearing of nose masks and keeping the one-metre distance from one another.

At the Tankase Line Centre in the Ablekuma Central Constituency, the registration officer, Mr Rapheal Lamptey, said many of the registrants had refused to observe the safety protocols, citing varied reasons for the state of affairs.

“Some of them don’t understand that they have to observe physical distancing, so when you tell them to go back or space out, they say the virus is not deadly,” he said.

Asked why he was not relying on the police to enforce the protocols, he said the police were not stationed at the centre and, therefore, could not be around any time there was an incident.

The situation was not different at the City Engineers Centre at James Town, where many of the about 200 prospective registrants gathered did not wear nose masks nor observe the social distancing protocols.

“We want to just register and go home. This is my sister; we stay in the same house and so why can’t I touch her or talk to her?” a woman who gave her name as Naa Borley told the Daily Graphic at the centre.

The registration officer, Ms Munira Tagoe, said beyond the total disregard for the safety protocols, the process had been a bit slow because the registration machines had frozen twice and had to be restarted.

At the Additrom Centre in the Klottey Korle Constituency, there was a Veronica bucket at the entrance for washing hands and only a few people, many of whom were wearing nose masks, were still seated, waiting for their turn to register.

In Wa in the Upper West Region, Emmanuel Modey reports that many people still did not observe the COVID-19 physical distancing protocol when the exercise entered the second day .

In the Wa municipality, a visit to the Limanyiri and Kpongu Clusters showed that safety protocols, such as physical distancing, were still non-existent.

The large number of people who had formed queues did not adhere to the necessary protocols such as avoiding overcrowding and covering the mouth and the nose with masks.

Those who were in possession of nose masks rather kept them in their pockets.

From Kumasi, Kwadwo Baffoe Donkor writes that prospective registrants at Asuoyeboa SSNIT Flats and its environs in the Kwadaso Constituency were left frustrated with the slow nature of the exercise.

At the SSNIT Post Office Centre, as of 1 p.m. yesterday, the officers were still attending to those who had come there the previous day but had not been able to register.

That group of people, who were given numbers to report yesterday, were not made to join the queue but allowed to go through the process.

That led to a long queue of those who had come on the second day to register, with some abandoning the queue because they had to go to work.

There was only one machine for taking pictures and it was working at a very slow pace.

Aside from the few hitches, the process was orderly, with the people observing the physical distancing and wearing of nose masks protocols.

There was a queue dedicated to the aged, nursing mothers and pregnant women and they were attended to.

Meanwhile, there was no canopy to provide shade for the prospective registrants.