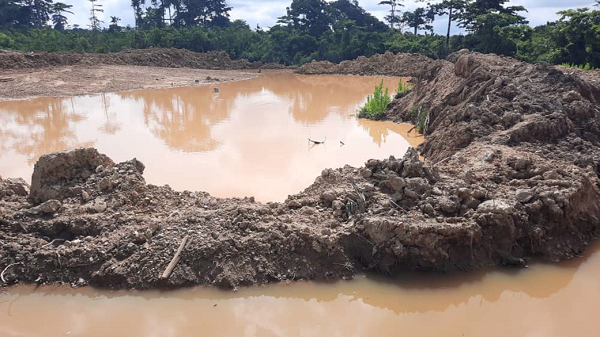 A degraded land; it shows the activities of the illegal miners
30.5k Shares

Residents of three communities in Sefwi Anhwiaso Bekwai Municipality in the Western North Region have appealed to the President and the Minister of Lands and Natural Resources to stop illegal miners whose activities they say are destroying their farmlands and water bodies.

The illegal miners are also alleged to have invaded some forest reserves in the area, and destroyed large acres of cocoa farms.

Indeed, there was evidence of massive destruction of parts of the forests, each of them showing gaping holes that had collected water, and active excavators showing ongoing activities.

The residents have embarked on a demonstration to kick against the activities of the illegal miners, saying the activities were depriving them of their livelihoods.

They blamed leaders of the municipality for complicity, insisting that the leaders had not made any attempt to stop the illegal miners.

Forest reserves such as Chine, Merewa and Ntakam have all been invaded by the illegal miners.

The Chine Stream, which feeds into the Ankobrah River, has been heavily polluted.

A resident, Ms Ernestina Amprofi, who spoke to the media, said the stream was the only source of water for the people, but had now become so polluted that “we cannot use it for anything, and have to travel long distances in search of water for domestic use”.

Ms Amprofi said the illegal miners had destroyed all their farmlands.

“We cannot even go to our farms as all the lands and roads leading to our farms have been destroyed,” she complained.

The Assembly Member for Bibiani Estate Electoral Area, Mr Kwame Asamoah, who led the residents on the demonstration, said it was high time the government stepped in to stem the activities of the illegal miners to save the residents from further hardship.

He said already the people were having challenges with their livelihoods, and added that all their cocoa and food crops had been destroyed by the illegal miners.

He said the illegal miners had also destroyed their water bodies and deprived them of access to potable water for their domestic use.