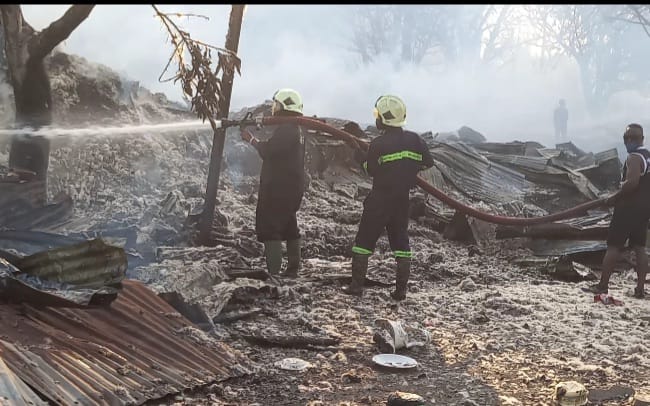 One person has been confirmed dead after 40 shacks at Asafo BB slum near the VIP bus terminal were bunt down on Sunday.

The fire is said to have been started by a couple who left a naked fire unattended. The fire spread through a pillow and mattress making area before finally engulfing the entire slum.

The deceased, believed to be in his twenties, relocated recently from Atonso, a suburb of Kumasi to join his friends at the slum.

Confirming the story to Daily Graphic, the Komfo Anokye Teaching Hospital Fire Commander, Divisional Officer Grade 3, Simon Ben Boadu, said the office had a distress call around 2:23 pm on Sunday and quickly dispatched a team of officers to deal with the situation.

"Due to the dense population, and the intensity of the fire, an additional two tenders were deployed to assist," he said.

After four hours of the blaze, the officers were able to extinguish the fire.

"It is important to state that one boy was killed by the fire and his body has been sent to the morgue," the divisional fire officer said.

Properties worth hundreds of Ghana cedis are said to have been lost as manufacturers of pillows and mattresses count their losses.

When Daily Graphic visited the scene on Monday morning, smoke from the blaze could still be seen coming out from the remnants as scrap dealers took advantage of the situation to scavenge for the spoils.