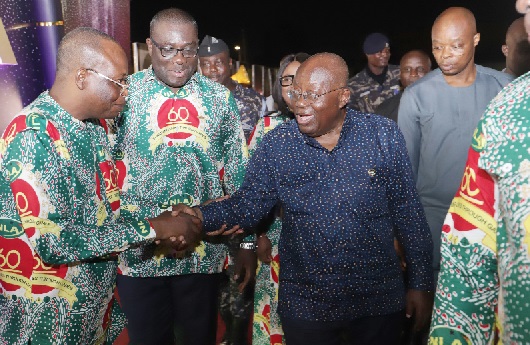 President Nana Addo Dankwa Akufo-Addo has charged the National Lottery Authority (NLA) to sanitise the industry to prevent minors from patronising the lottery and betting space.

He said the move must lead to responsible gaming because Ghanaians were expecting reforms that would help the authority to live up to its vision of becoming the organisation of choice and blueprint for lottery in Africa.

President Akufo-Addo, who made the call at a durbar in Accra last Friday to climax activities marking the 60th anniversary of the establishment of the NLA, commended the Maltese government for helping Ghana establish its lottery organisation 60 years ago.

The 60th anniversary celebration began with an official launch in September 29, 2022. The climax attracted the leadership of the global lottery association, the European Union, representatives of over 15 African countries and the Ambassador of Malta, Barbara Akoukor Benisa.

During the first Republic, the Minister of Finance, Komla Agbeli Gbedemah, visited Malta and witnessed how the game was played.

On his return, President Kwame Nkrumah had discussions with the Maltese government, which agreed and sent in officers to help Ghana to establish its lotteries organisation.

In 1962, Parliament passed the lotteries Act.

As an institution tasked with revenue generation, President Akufo-Addo employed the NLA to ensure that it exercised the highest form of transparency and integrity in the conduct of its draws to uphold the confidence that the public continued to have in it.

“The onus to achieve this does not only lie in your ability to generate revenue for government and give back to society but more importantly, ensuring that the countless Ghanaians who play a lottery game receive a true reflection of the daily results published,” he said.

He added that it was only then that the authority’s promise of enriching lives through games would hold true.

President Akufo-Addo noted that proceeds from lotteries globally had been used to support good causes in society, and made reference to the World Lottery Association (WLA), which said, “earnings have funded more than 1.5 million scholarships and grants”.

He said in Africa, one of the trailblazers in the industry which had been an inspiration to the NLA was Cote d’Ivoire, where almost every community in that country had been touched by the proceeds from lottery.

The President commended the NLA for its sustained efforts in maintaining this national endeavour especially for its sense of commitment in fulfilling the obligation embedded in the NLA Act to take care of the needy, aged, orphans and the destitute.

“Giving back to society through your Good Causes Foundation complements the efforts of government in the development of our country and is worthy of emulation by others,” President Akufo-Addo added.

The Director General of the NLA, Samuel Awuku, explained that the NLA Good Causes Foundation, which was established in October last year, had touched over 200,000 lives in several communities across the country aside from the commissioning of mechanised boreholes and sanitary facilities, among others.

He added that the foundation also donated food and sanitary items to several institutions, supported hospitals with incubators, refurbished schools in remote areas, granted scholarships to bright, needy students, and established a smart love for the Borstal home.

“We believe there will be bigger hurdles to cross. We, however, remain resolute with a renewed commitment to do better for our patrons,” he said.

A Deputy Minister of Finance, Dr John Kumah, said the NLA was expected to come up with more innovative games and diversify its brands to make the games more excitin, offer players more options and ensure responsible gaming.

“It is pleasing to know that you have made strides in addressing some of your toughest challenges and I commend you for the intending plans to collaborate with some international partners to broaden your digital space,” he added.