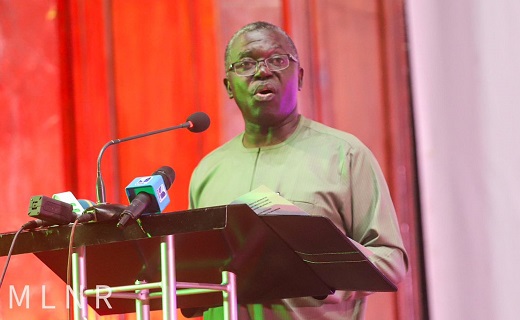 Benito Owusu-Bio,Deputy Minister of Lands and Forestry speaking at the closing session of the National Lands Conference
30.5k Shares

Participants in the National Land Conference in Accra have called on the government to take urgent steps to survey and map all customary and state land boundaries across the country as a matter of priority.

In addition, the conference stressed the need for the government to comprehensively map out the boundaries of metropolitan, municipal and district assemblies (MMDAs) to reduce the numerous land ownership disputes in the country.

The conference said this must be anchored on a comprehensive programme for the registration of land as mandated by the 1992 Constitution and the Land Act, 2020 (Act 1036).

A land tenure expert and representative of Ghana Institution of Surveyors, Dr Odame Larbi, who read a 23-point communiqué at the end of the four-day conference in Accra last Friday, said comprehensively mapping the country “at large, medium and small scales” would facilitate land use planning and spatial development for rapid economic development.

The conference again called on the Lands Commission to make conscious efforts to digitalise the country’s land administration system for sustainable development.

They discussed pertinent issues in the land sector, particularly the challenges in both the state and customary land tenure systems in the country.

Dr Larbi said the conference observed that as a way forward to addressing these challenges, there was the need for the government to facilitate prompt action towards the development of regulations on the Land Act and a Land Act implementation strategy.

Aside from that, the conference called on the government to provide adequate resources for the implementation and enforcement of laws on land, land use planning and spatial development.

Dr Larbi also called on the government to provide resources to review the 1999 National Land Policy and formulate a new one to take on board the new challenges and emerging issues of the sector.

The conference called for resources to be provided for the establishment and strengthening of customary land secretariats (CLSs) to effectively support customary land administration.

The conference called on the government to activate processes for the imposition of a moratorium on small-scale mining to stop the devastating impact of illegal mining activities on the land.

Dr Larbi stressed that since land formed the basis for all development activities in the country and also served as the source of livelihood for the majority of people, it was important for the government to take bold measures to protect the natural resource from destruction.

The Deputy Minister for Lands and Natural Resources in charge of Lands and Forestry, Benito Owusu-Bio, who closed the conference, called on the stakeholders to play their respective roles in making land administration better.

Mr Owusu-Bio assured the participants that the report of the conference would inform the next steps at the ministry.