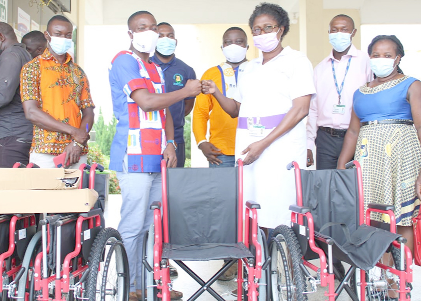 Mr. Emmanuel Yaw Mensah Gokah (2nd from left), President of the Rotary Club of Koforidua - New Juaben, handing over the wheelchairs to the Deputy Director of Nursing Services Dorothy G. Takyi (3rd from right), the Head of the Nursing Administration, while other members of the Rotary Club and staff of the hospital look on

The Rotary Club of Koforidua -New Juaben has donated wheelchairs to the Eastern Regional Hospital in Koforidua in the New Juaben South Municipality to support patients move from one location to the other.

The five wheelchairs and other parts worth over GH¢7,500 were provided through the health intervention initiative of the Rotary Club to health facilities in the region.

The customised wheelchairs, donated last Wednesday, will complement the limited number of wheelchairs currently at the facility.

In an interview with the Daily Graphic, the President of the Rotary Club of Koforidua-New Juaben, Mr. Emmanuel Yaw Mensah Gokah, said the gesture flowed from their interest to ease the difficulties health workers faced while trying to move patients with difficulty in movement following his visit to the facility months ago.

He explained that he chanced upon several worn out wheelchairs carrying patients from the outpatient department (OPD) and several others unable to work; hence their decision to donate the chairs to the health facility.

Receiving the items on behalf of the hospital, the Head of Nursing Administration, Deputy Director of Nursing Services (DDNS) Dorothy G. Takyi, expressed gratitude to the Rotary Club of Koforidua - New Juaben, stating that the donation was timely as a number of the existing wheelchairs had worn out.

She explained that the hospital had 65 wheelchairs but 13 of them which were worn out had been auctioned this year. This, she said left the facility with only 52, which were still woefully inadequate, considering the number of patients and emergency cases that required the use of wheelchairs.

On the use of the new wheel chairs, she said they would be stationed at the OPD and the children's ward to help with the swift movement of patients who were in need of them as part of the healthcare process.

She appealed to other corporate organisations, non-governmental organisations and the general public to continue to support them with wheelchairs as the existing number could not caster for the average number of 900 patients who visited the facility daily, a number of whom required the use of wheelchairs.