Minister calls for harmonisation of efforts among ECOWAS 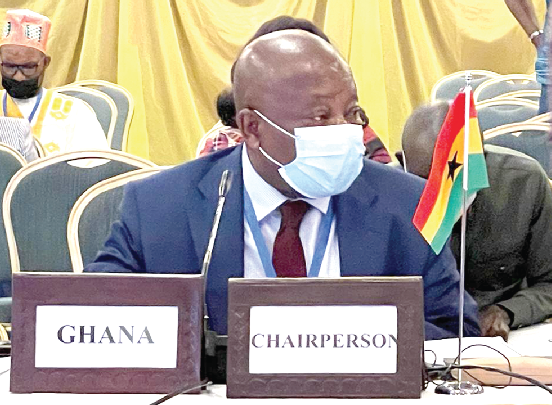 Mr. Kwaku Agyeman-Manu — Minister of Health, at the 22nd Ordinary Session of the ECOWAS Assembly of Health Ministers in Abuja-Nigeria

The Minister of Health, Mr. Kwaku Agyeman-Manu, has called for the harmonisation of efforts among member states of ECOWAS to mitigate some of the negative impacts of the COVID-19 pandemic on the sub-region.

That, he noted, was to ensure the consistency of policies and measures implemented by the various states.

Mr. Agyeman-Manu, who made the call at the 22nd Ordinary Session of the ECOWAS Assembly of Health Ministers in Abuja-Nigeria last Friday, noted that working together would promote the flagship project of free movement.

He said it would also ease restriction measures to facilitate the movement of goods, people, capital and services, while at the same time strengthening health and sanitation measures.

Mr. Agyeman-Manu explained that aside from health, the pandemic had had a heavy toll on economies in the sub-region, a “situation which threatens to impede our ability to sustain the response effort”.

He referred to a recent report by Reliefweb, which showed that the rate of spread of COVID-19 in the ECOWAS region and the measures taken to halt the spread were draining the socio-economic system of member states.

“Thus, the resultant economic recession and the swift response of governments to the COVID-19 crisis will have a significant impact on the evolution of public debt relative to the GDP of countries.

“Admittedly, this situation calls for concern, as any economic downturn has a direct impact on expected investments in the health sector. This will certainly be disastrous in the midst of a pandemic of this magnitude,” he added.

He noted that the adverse impact notwithstanding, the sub-region had been successful in containing the virus, despite claims by sceptics that Africa did not have the ability and the capacity to deal with the crisis.

He cautioned that the sub-region was “not out of the woods yet, and we cannot, therefore, be complacent. We must continue to comply with the existing protocols until we can be certain of flattening the curve”.

Mr. Agyeman-Manu, who chaired the meeting, expressed optimism that the “reports and resolutions will give us a better insight into the huge efforts we have collectively made as a region to deal with the COVID-19 pandemic, as well as the other health challenges confronting us”.