African countries must remove all barriers to free movement of goods, persons and services to achieve goals set under the African Continental Free Trade Area (AfCFTA).

The Dean of the School of Law of the University of Professional Studies, (UPSA), Accra, Professor Ernest Kofi Abotsi, said all imports and export quotas that made trading more difficult and costly among nations on the continent must be removed.

He mentioned free movement without hindrances by visa and other restrictions as some of the measures that could promote trade by enabling easy exchanges while ensuring that supply chain dynamics were not obstructed.

For instance, Prof. Abotsi said if continental entrepreneurs were expected to move from embassy to embassy in search of visa anytime they had to travel to visit their businesses, the risk of not getting a visa could be sufficient disincentive to deter them from investing and doing business across the continent.

Prof. Abotsi was speaking at the second edition of the Academy of Arts and Sciences (GAAS) public forum in Accra last Tuesday on the theme: “African Continental Free Trade Area: Challenges and Prospects.”

For a continent that has suffered too much poverty, the lecturer said it remained counterintuitive that it was the least traded among itself, with intra-regional trade hovering around 16 per cent when the global average was above 50 per cent.

“Having undergone a process of cross-continental decolonisation for over 50 years, African countries have no business maintaining and enforcing colonial boundaries erected to preserve the interest of colonial powers in the wake of colonial imperialism,” he added. 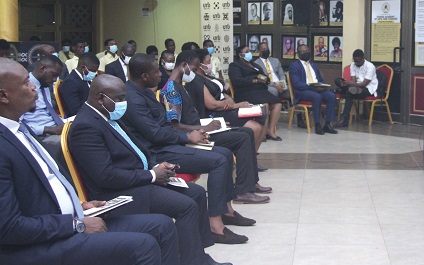 Prof. Abotsi further said the African Union and the AfCFTA Secretariat must speed up the protocol on free movement, adding that “perhaps the secretariat could circumvent the complex and slow-pace process at the multilateral level by starting a voluntary free movement area under which member countries could be encouraged to voluntarily sign up”.

The Dean said the resultant economies of scale ensuing from such free movement could encourage others to join and ultimately lead to a faster adoption of a continent-wide visa-free regime, as well as a complete removal of all restrictions on travel.

According to Prof. Abotsi, the establishment of the supporting structures and diversity of the market in the AfCFTA zone was a sine qua non for the growth of the economy.

“What will shape the AfCFTA will not be state interest or treaty commitment of the regime, but the economic forces of demand and supply, and demand is driven by interest.

“Countries which are structurally primary commodity-dependent are unlikely to demand each other's product as the capacity to transform those products into finished or value-added materials is limited,” he said.

On corruption, Prof. Abotsi said it remained a major obstacle to the growth of the continent and that the inception of the COVID-19 pandemic had offered more opportunities for corrupt officials to further their activities.

“Where traders are asked to make illicit payments or be excluded, that tends to heighten the transaction costs of doing business and this acts as a disincentive towards commencing and sustaining business across the continent”, he said.