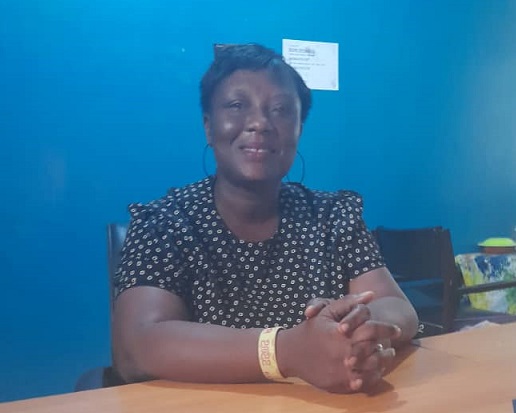 Gifty Tekper (left), Manageress of the centre, being interviewed by Augustina Tawiah, our reporter
30.5k Shares

THE first batch of girls from the Junior Girls Correctional Centre in Accra, who sat for the National Vocational Training Institute (NVTI) examinations in May last year and passed, have successfully secured jobs with their certificates.

The seven girls had come into conflict with the law for committing offences and had been committed to the centre by the court to serve terms that ranged from six months to four years.

As part of their committal to the centre, they were given the necessary skills training and academic tuition to enable them to write the examination.

They wrote the examination in fashion designing and have since been presented with their certificates.

The Manager of the centre, Gifty Tekpor, in an interview with the Daily Graphic, said after writing the examination in May last year, some of the girls had since completed serving their terms of committal and had been discharged from the centre.

She said with the aid of the skills acquired and the NVTI certificates, those who had been discharged were now either self-employed or serving as employees for businesses.

Mrs Tekpor said for those who were still serving their terms of committal, anytime the centre got orders from people outside, they were despatched to the place to do the work, adding that they were normally accompanied on such duties by social workers from the centre.

She added that hitherto, they were just providing skills training such as dressmaking, hairdressing and beads making to the girls but in 2020, they decided to mix them up with the other girls at the centre to undergo the education and subsequent sitting for the examination.

Correctional centre
The Junior Girls Correctional Centre has its origin in the pre-independence era and it was formed to assist in the character reformation and provision of vocational skill training to juvenile offenders sentenced to serve in the correctional facility.

It also serves as a place where care and protection are giving to girls who are on remand pending the determination of their cases in a court of competent jurisdiction. It is the only such centre in the country.

The minimum period that girls may spend in the centre is a minimum of three months and the maximum is three years depending on the offences committed.

The centre shares its premises with three other institutions under the Department of Social Welfare.

They are the Boys' and Girls' Remand Homes, which are outfits that take into custody male and female juvenile offenders aged between 12 and 17 years old who are not released on bail; the Shelter for Abused Children which receives and treats cases of abuse of various forms committed against children with the police as the main source of referral and the South Labone Girls' Vocational Training Centre that was opened in 1987 as a social service to females interested in learning vocational skills.

With the latter, the girls come to school from their homes and are supported by their families while the needy among them are sometimes identified and assistance is sought to help them complete.

Importance of the certificate
Mrs Tekpor said with the certificate acquired, parents of the girls could decide whether or not their children could further their education to any tertiary institution, adding that the girls were very happy for the opportunity given them to write the examination.

On whether or not they would continue to assist the girls of the centre to write the NVTI examination, she answered in the affirmative. However, she said for 2023 they would not be able to do so.

That, she explained, was because to write the NVTI, one should be in the third year.

However, the girls there now were in their first and second year so they did not qualify to write the 2023 examination, adding that they were now preparing them for 2024 and beyond examinations.

Challenges
Mrs Tekpor expressed concern that in spite of the efforts of the centre, “we do not get the full cooperation of some parents in caring for the children at the centre.”

She said some never visited their children at the centre until they had completed their terms of committal, adding that for some of the parents, even when they called them that the children were ill, they would not come.

The manager attributed that to broken homes and advised parents to consider their children anytime they were in conflict with each other.

She further advised children to be of good behaviour and concentrate on their education and skills training given them so that they did not get involved in conflict with the law.

“You should be content with whatever your parents give you.

Those who can support your parents in their livelihoods do so, but don’t go after quick money or follow friends to end up here,” she advised.