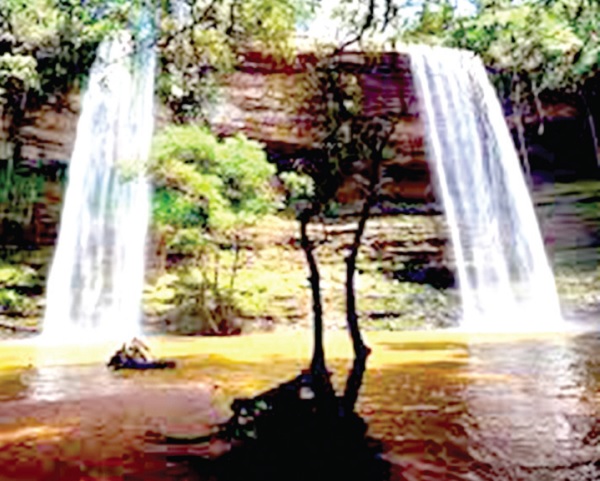 The twin falls with the male one on the left and the female on the right
30.5k Shares

Boti is a small community within the Yilo Krobo Municipality in the Eastern Region with a population of about 1,000 inhabitants and has been in existence since 1903.

In the words of the Municipal Chief Executive (MCE) for Yilo Krobo, Eric Tetteh, during that period when the British were holding sway in the Gold Coast, it was only a small community of thatched houses and a population of less than 50 inhabitants, most of whom were peasant farmers and hunters.

According to the MCE, a few years later a Catholic Priest discovered the flowing of water from two streams on a mountain into the valley deep in the forest on the outskirts of Boti.

The streams, which take their source from the Ponpon River of which the water falls into the valley, have transformed the site into a very beautiful scenery.

Another landmark that has added beauty to the Boti Falls is a nearby mountain in a shape of a table; thus, Table Mountain is popularly known as Umbrella Rock.

In local parlance, the two streams are described as a male and a female and considering how the water flows from them, the one on the left-hand side is referred to as the male with the other one on the right side as the female.

At times, particularly during the rainy season when the two falls combine, the indigenes consider it as a mating session.

The picturesque nature of the falls and that of the nearby Table Mountain has made the site a tourist attraction, putting it on the tourism map, not only in the Eastern Region of Ghana but the world at large.

This is because thousands of local and foreign tourists visit the site to see two of nature's beautiful creation.

The falls have been christined as the Boti Falls (due to their proximity to the Boti township are about 17 km from Koforidua, a 30-minute drive; and a 90-minute drive from the national capital, Accra.

To get to the falls, tourists or revellers have to descend over 70 steps, a strenuous and exciting exercise in which many of the tourists have to bathe in the volume of water gathered at the base to refresh their bodies from perspiration.

Mr Tetteh said the site had been a source of revenue for the municipality.

According to him, the facility had been providing a lot of money, especially during holidays when hundreds of visitors thronged the area to see the wonders of nature and make merry.

Mr Tetteh cautioned tourists to be mindful of whatever they did at the site to prevent unforeseen accidents.

The Manager of the Boti Falls, Irene Djanjoe, told the Daily Graphic that everything that would make tourists and revellers feel at home had been put in place at the site.

Such facilities include places of convenience, bathrooms and sleeping places (a mini hotel).

Also, there is a restaurant to provide food at all times, especially on holidays.