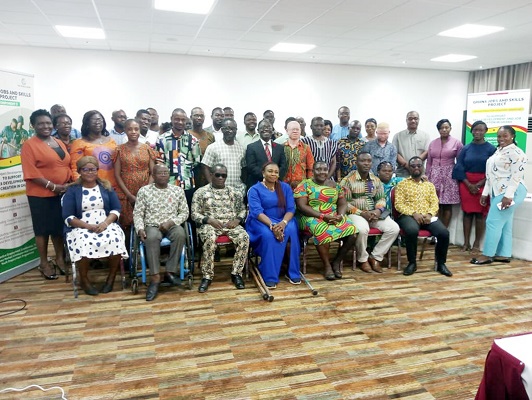 Participants of the consultative meeting between the Ministry of Employment and Labour relations and the PWDs
30.5k Shares

The Ministry of Employment and Labour Relations has held a consultative meeting with persons with disability (PWDs) to factor in their concerns on the ongoing implementation of the Ghana Jobs and Skills Project.

The project is aimed at creating a user-friendly, web-based and easily accessible one-stop shop Labour Market Information System (LMIS) to support jobseekers across the country.

The project started in January 2021, and currently the LMIS is being developed.

The ministry is, therefore, engaging key stakeholders to ensure that the system is accessible and useful to all segments of the labour force.

The Minister of Employment and Labour Relations, Ignatius Baffour-Awuah, in a speech read on his behalf at the meeting yesterday, noted that the ministry had been mandated to promote job creation in the productive sectors through the development and strengthening of intersectoral linkages.

The ministry, he said, over the years had performed its mandate of promoting job creation by implementing a number of interventions and job modules to address youth unemployment.

“Despite the efforts, there have been several challenges that impede the ability of the ministry and its agencies to meet the demands of all jobseekers, particularly, persons with disability,” he added.

The Ghana Jobs and Skills Project (GJSP) being implemented by five ministries, including the Labour Ministry, is to support the government’s effort to create more jobs through skills development and efficient coordination of the labour market.

Implementation
The Labour Ministry’s role for the project was to implement component 3 of GJSP which included the operationalisation of the Ghana Labour Market Information System(GLMIS) and revamping 16 public employment centres across the country to support the initiative.

It was also to review independent performance of government youth employment and skills development programmes.

The public centres located in the districts are to be used for counselling and employment promotion purposes.

The ministry was currently at the stage of developing the GLMIS to ensure it is accessible and useful to all segments of the labour force.

"The GLMIS will be a one-stop-shop platform for all labour market data/information that will enable stakeholders to take evidence-based decisions such as the needed skills to facilitate their employment in the various industries", the minister indicated.

The meeting, he said, was to solicit inputs from the PWDs on how to address their needs in seeking employment.

The interventions, he said, would enable the ministry to generate accurate data and disseminate comprehensive same about all the segments of the market in a timely manner and implement effective active labour market interventions that would support jobseekers, including persons with disability to take advantage of job creation or employment opportunities in the labour market.

No Data
The Project coordinator of GJSP (Component 3), Ernest Berko, noted that the general lack of labour market information on PWDs such as employed, unemployed, skilled, unskilled, semi-skilled,among others, was a challenge for the ministry.

The population of PWDs was estimated at 5 million; however, “Data on PWDs seeking jobs are not available and this is affecting government policies,“ he said when he gave an overview of the GJSP Component 3.

Mr Berko called on the representatives of PWDs at the meeting to support the ministry to develop a responsive system that would be useful in linking them up with employers who may need their skills and expertise in the industry.

Representatives of the PWDs expressed their interest in the project and indicated that unemployment among PWDs was a major challenge and therefore hoped that the platform to be created from the project would serve the purpose of job creation among PWDs.