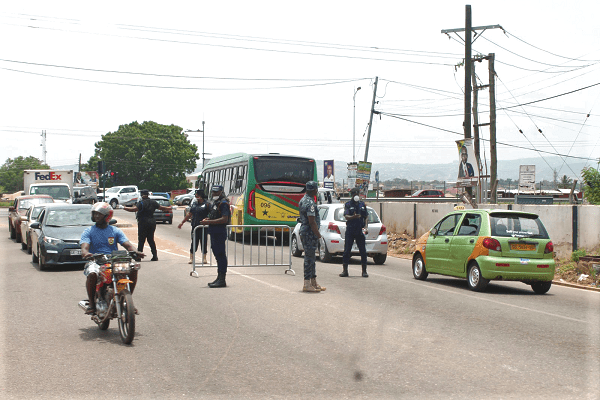 Some police personnel manning their post at the Adenta barrier during the lockdown. Picture: Maxwell Ocloo Follow @Graphicgh

In clear defiance of the presidential directives on restriction of movements, many people in Accra and Kumasi have been moving from one part of the cities to the other daily.

Since the directives took effect on March 30, this year, people have been trooping to various parts of Accra to undertake various activities, while in Kumasi, the authorities have had to contend mostly with the multitudes of people who went to some of the markets daily to undertake their activities, a development that led to the closure of the Kumasi Central Market yesterday.

Many of the commuters, in their bid to outwit the security personnel stationed at checkpoints dotted in Accra, were alleged to have faked identity cards to enable them to fall within the exempt categories of people allowed to do business in town.

Those who feared police interrogation at the checkpoints were seen trekking long distances on foot through areas where the police could not trace them.

Others on motorbikes also used narrow walkways through the bushes as they tried hard to ferry their passengers to their destinations.

At Okponglo near the University of Ghana, for instance, traffic came to a complete standstill for several hours in the greater part of yesterday morning through the early hours of the afternoon as hundreds of vehicles were being checked by the police officers stationed to enforce the directive, reports Charles Benoni Okine.

One of the officers who gave his name only as Sackitey, said the rule was being enforced and those without ID were being turned away.

However, another policeman who refused to disclose his identity said the IDs being produced by a majority of the commuters could not be verified, which was creating a major challenge for the security people on duty.

“The longer we interrogate them, the worse the traffic gets” he said, adding that “at each checkpoint, we are not very many and also, the lanes are few so we are forced to allow many to pass. We only manage to turn away a few vehicles at a time once the drivers are unable to show any IDs at all”.

At the Central Business District of Accra, scores of people were seen selling wares on some pavements around Makola.

Vehicles loaded with goods, with one passenger in each of them, were also captured. Through that, they are able to secure permit from the security to pass.

Many commercial vehicles were also seen alighting people they had picked from different parts of the city to the business district to do business.

At Madina Zongo Junction yesterday, dozens of commercial vehicles were carrying passengers without observing the social distancing advice. Market women and members of the public were in their numbers like a normal market day to conduct their business.

Some of the people told the Daily Graphic that they were tired of sitting at home and had to go out to make some money. Others also said they wanted to restock their depleting food and grocery supply.

However, one obvious observation was the non-adherence to the social distancing rule, particularly, at a time when the number of infected people had crossed 200 and still counting.

There was massive traffic from the Apenkwa Overhead Bridge towards the Tesano traffic light, near Papaye last Monday, as many people tried to access the Central Business District of Accra, Esther Somuah reports.

The standstill came about because the Tesano Police Station Commander stood his ground to thoroughly interrogate all vehicles to ascertain whether they had a pass to enter town or not.

Many vehicles, both private and commercial without the right identities, were returned but that did not stop the traffic.

Instead of going back to where they were coming from, the drivers rather explored other alternative routes.

Majority of the taxis were empty and therefore the police found no need for them to be out on the streets.

Those in private cars who could not offer any reasons or produce any form of identification to prove their status as essential service providers were also turned away. Those who were able to produce them were asked to drive on.

Emelia Ennin Abbey writes that a visit by the Daily Graphic to about 30 checkpoints mounted in areas such as Ablekuma, Kwashieman, Kaneshie, Accra Central, Mallam , Amasaman, Achimota, Lapaz, Abeka, Nyamekye and Darkoman saw policemen and soldiers working to ensure that persons who did not fall in the exempt group were prevented from driving through the checkpoints.

The situation resulted in the slow movement of vehicles and also left some persons stranded.

In an interview, the Head of Operations Unit of the Accra Regional Police Command, Assistant Commissioner of Police (ACP), Mr Kwesi Ofori, said some commercial drivers were becoming a nuisance as they were operating without adhering to the directives.

“They are bringing people who are not essential workers to the Central Business District and also not observing the social distancing arrangement in terms of the number of passengers they carry and their sitting arrangements in the vehicles. That is why we are stopping them from moving at some points,” he explained.

He said the aim was to encourage people to stay at home, stressing that “unless you are a key worker or helping someone vulnerable, the only reasons to go outside are to go shopping for essentials or fulfil any medical needs.”

In Kumasi, Nana Yaw Barimah reports that the metropolitan assembly was forced to close down the central market yesterday after recalcitrant traders persistently broke the protocols meant to prevent the spread of the virus.

According to the Kumasi Metropolitan Assembly (KMA), the reports the assembly received from the Metropolitan Security Committee (METSEC) indicated that the traders had blatantly disregarded the World Health Organisation’s (WHO) social distancing protocols.

The Kumasi Central Markets is considered one of the biggest open market in West Africa and is home to thousands of traders.

A statement issued by the Kumasi Metropolitan Assembly (KMA) last Monday night, said: “ The scary nature of the report warranted an emergency METSEC meeting with the 11-member committee of the Kumasi Central Market, as well as other leaders of the 67 trade associations in the market.

Signed by the METSEC Chairman and Metropolitan Chief Executive (MCE), Mr Osei Assibey Antwi, the statement said after a lengthy discussion on the matter, it was decided that the central market be closed to enable traders reorganise themselves into groups to trade in turns.

The move, the statement noted, would reduce congestion and thus give meaning to the social distancing rule.

Yesterday morning, Mr Osei Assibey was on the ground to ensure the directive closing the market was carried through.

Speaking to the Daily Graphic, he said once the traders agreed to obey the protocols, the market would be opened. “Even if they agree today, we will open the market tomorrow,” he said. “

As of press time, the METSEC was in a meeting with the traders’ leaders to find a way out.

It was the second time that a market in Kumasi had been shut in the midst of the restrictions of movement directives. The first was the Dr Mensah Market, last week.