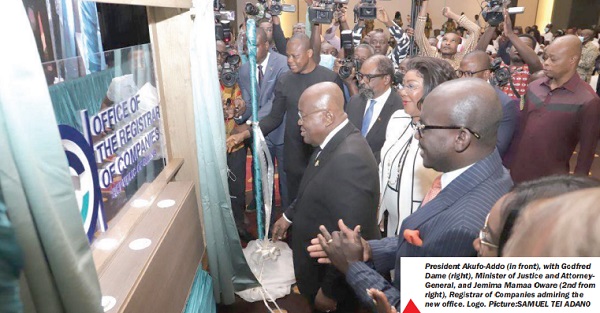 President Nana Addo Dankwa Akufo-Addo yesterday launched the new Office of the Registrar of Companies which is taxed and clothed with the mandate to boost investor confidence, fight corruption and increase the ease of doing business.

The Act establishing the office is also entrusted with the important function of solely taking up the duties of company and business registration and advisory services.

With the passage of the new Company’s Act, 992 of 2019, provision is made for the establishment of this new statutory entity, the Registrar of Companies, which is different from the Registrar General’s Department.

Inaugurating the office, he said the new Registrar of Companies was a body corporate with perpetual succession it might, as a result of acquire and hold property and enter into contract or any other transaction.

He explained that regarding the ability of the Registrar of Companies to mobilise sufficient substantial internally generated funds, the office was required by Act 992 to be financially autonomous of the government.

President Akufo-Addo said for the timely provision of information to be entered into the company’s register, including processes to verify information to be provided by companies to the registrar and directing access to information contained in the registrar, “the Office of the Registrar of Companies will become a viable partner of the government in the effort to root out corruption”.

That, he indicated, was because the phenomenon of the creation of fake companies and opaque financial systems that provided an opportunity for the laundering and concealment of illicit wealth was being curtailed dramatically by the enactment of Act 992.

The new Companies Act required that within five years of coming into force of the law, all operations of the offi ce became completely digitised.

President Akufo-Addo commended the Registrar of Companies for the efforts to ensure that all records of companies and businesses registered were digitised.

“This is in line with the goal to go completely digital and make the retrieval of records of companies and businesses timely and effi cient”, he added.

He said Act 992 called for the establishment of this new statutory entity, which separated the offi ce of the Registrar of Companies from the Registrar General’s Department, which was entrusted with the function of taking up solely the duties of companies and businesses registration and advisory services.

The Minister of Justice and Attorney-General, Godfred Yeboah Dame, said the reform of test and practice of company law in Ghana was commenced by President Akufo-Addo when he was the Justice Minister in 2002 when he formed the Business Law Committee.