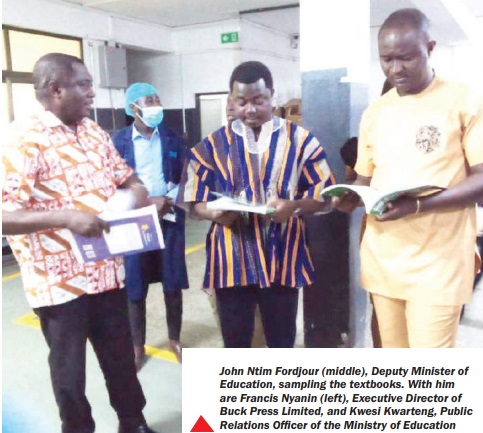 The government has distributed 296,827 textbooks for basic schools in three regions in the country.

They are the Ashanti, Eastern and Bono regions.

The first batch of 123,000 was delivered about two weeks ago, while the second batch of 173,827 left the premises of Buck Press Limited yesterday.

The 296,827 books which were printed by the Buck Press formed 60 per cent of the quantity of works to be delivered by the company.

The books have been delivered ahead of schedule, in a period of 30 days, instead of the 120-day target given by the government to deliver 50 per cent of the books.

A Deputy Minister of Education, John Ntim Fordjour, who was at the company yesterday to witness the distribution of the books, told journalists that he was impressed with the quality of work that had been done.

The deputy minister, who was taken through the processes of production of the textbooks, said the government had achieved value for money, having negotiated with the publishers to produce the books at half of the estimated cost.

“It is the commitment of the President, Nana Akufo-Addo, and the Minister of Education, Dr Yaw Osei-Adutwum, to ensure that following the reforms of curriculum into standard-based curriculum, we have textbooks of all subjects available in the classrooms for teaching and learning,” he said.

For that process to go through, he said, the government took the decision to engage local printers to execute the work.

“So as you can see, all the books we are supplying to our various classrooms are printed right here in Ghana, contrary to what may have happened in the past by foreign printers and shipped to the country,” he said.

Rev. Fordjour indicated that since the reform of the new curriculum into standard-based curriculum, the government had been committed to print books for learners and teachers in all the classrooms in the country.

“So, for all the subjects that are taught in the public schools, government has taken the necessary steps. In so doing, we needed to ensure that quality assurance had been done so that every ‘i’ is dotted and every ‘t’ is crossed.

“We don’t want the situation where books that would be purchased with the taxpayers money would get into classrooms and there are mistakes on some pages. So quality assurance process had to be undertaken,” he said.

Again, he said, the government needed to ensure value for money, so the Minister of Education set up a committee to negotiate with publishers and put him in charge of those negotiations.

“That also took some time but in the end we were able to save, under the leadership of the minister, 50 per cent of the taxpayers money. So monies that initially had been received in the form of quotations from publishers and budgeted put together that would have been expended on textbook printing as a result of that prudent negotiation and cooperation from publishers and printers, we were able to halve that budgetary allocation and we are having 50 per cent saved.

“At the time when the world over, paper and commodity prices are going up, we were able to make savings for the state and these are very remarkable to note”, he said.

For Buck Press, we are satisfied with the quality of work it has delivered. It is an indication that indeed we must be proud of the indigenous Ghanaian industry and the President believes in promoting the output of the local industry,” he said.

The Executive Director of Buck Press Limited, Francis Nyanin, said the company had the capacity to deliver, and as a result was able to deliver less than the days given to it.

“The ongoing processes tell you that we will even be able to deliver in less than the 90 days,” he said.