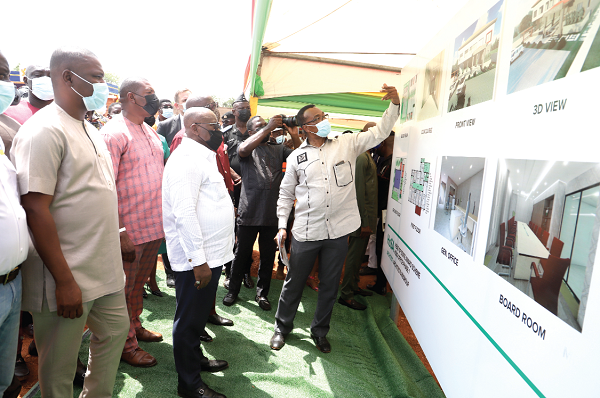 President Akufo-Addo being briefed on the project by Mr Dereck Gabbrani (right), lead consultant for the project. Looking on is Mr Mustapha Ussif (left), the Minister of Youth and Sports. Picture: SAMUEL TEI ADANO
30.5k Shares

President Nana Addo Dankwa Akufo-Addo yesterday cut the sod for the construction of a GH¢5-million administrative building for the Head of State Awards Scheme, the Ghana Award House.

When completed in 36 weeks, the two-storey office block, which will contain a 200-capacity conference room and a training facility, will house the National Secretariat of the Head of State Awards Scheme.

The scheme is an affiliate of the Duke of Edinburgh’s International Awards which are run in about 130 countries globally and chaired by the British Royal, Prince Edward, the Earl of Wessex.

The President said since its inception in 1967, the scheme had changed and touched the lives of many young people, including some 750,000 beneficiaries.

He said as part of the effort to ensure that more young people benefited from the initiative, a befitting administrative office for the scheme was necessary, adding that “the provision of a Ghana Award House to serve this purpose is my commitment towards driving the agenda of the scheme”.

President Akufo-Addo said when completed, the project would help drive growth through the effective and efficient delivery of the scheme to more people in the country.

He said the project would put Ghana ahead of other countries running the Duke of Edinburgh Awards programme and make Ghana the second country in Africa (after Kenya) to have such a facility.

The President said the government would continue to bear the operational cost of the secretariat, which is under the direct supervision of the Chief of Staff.

“Vehicles are also to be allocated to the secretariat, in addition to GH¢1 million contribution to this project. We will do what we can to ensure that the project is completed within the next 36 weeks,” he added.

President Akufo-Addo called on individuals and corporate bodies, especially those in the construction industry, to join hands to bring the project to fruition.

“Together, we can help make this project a reality. I thank all who have contributed consistently towards the success of the scheme. Now is not the time to rest on our laurels but help realise the vision of an awards scheme that is truly self-sustaining,” the President said.

Earlier, the President had said the Asian Tigers, such as South Korea, Japan, Singapore and Malaysia, attained their current state of development because of the systematic investments they made in the development of the human capital, particularly the youth.

He said it was for that reason that the government had, since 2017, continued to invest heavily in the development and education of young people in the country.

“I place great hope in the capacity of the Ghanaian youth to shape our future and make Ghana truly the Black Star of Africa,” President Akufo-Addo said.

The Board Chairman of the Head of State Awards, Mr Harry B. Sintim-Aboagye, said the project would constitute a legacy of President Akufo-Addo for young people in the country and also serve as a new landmark for Ghana-UK friendship.

He said it would also help build the entrepreneurial skills of young people for the accelerated development of the country.