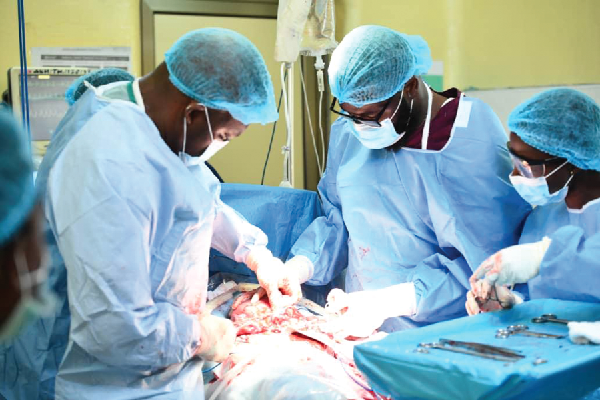 A set of Siamese twins were delivered yesterday at the Akuse Government Hospital in the Lower Manya Krobo Municipality.

A team of medical doctors led by Dr Taurus Valmont from the Akosombo VRA Hospital and other theatre staff performed the caesarean section which lasted an hour to deliver the babies.

It also took about three hours, according to the medical team, to resuscitate the Siamese twins before they were referred to the Korle Bu Teaching Hospital (KBTH) for further examination.

The Daily Graphic has gathered that an initial scan at the KBTH indicates that the babies, who are conjoined at the thorax (the chest) to the abdomen, are not sharing any organs.

Further scans would be carried out to check for vessels they might be sharing.

Dr Mousa, who was part of the medical team, told the Daily Graphic at Akuse that the theatre of the Akuse Government Hospital was built in 1922 during the colonial era and had, therefore, become too small, outmoded and lacked a lot of modern equipment that would facilitate the work of a medical team in the theatre.

He said for such a delicate operation, the medical team had to dig deep for a successful procedure, but they might not be lucky the next time round.

Dr Mousa, therefore, appealed to the government to build a modern and a well-equipped theatre with modern equipment for effective handling of cases in the theatre.

Dr Al-Hassan Mousa was grateful to the Member of Parliament for North Tongu, Mr Samuel Okudzeto Ablakwa, whose constituency the parents hail from, and was at the hospital and pledged to foot the medical expenses incurred on the Siamese twins until they were separated.

The parents of the Siamese twins, who wanted to remain anonymous, were also grateful to the MP for coming to their aid.

When reached for comments, Mr Okudzeto Ablakwa commended the medical team for carrying out the operation which medical experts described as “complex”.

He reiterated his commitment to foot the medical bills and said he would personally visit Korle Bu to see how they were faring.