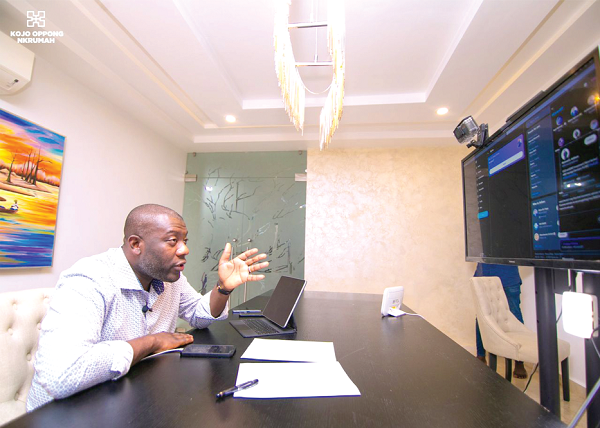 Mr Kojo Oppong Nkrumah, the Information Minister, having a virtual engagement with the entrepreneurs

As government prepares to present its 2022 Budget Statement and Economic Policy to Parliament on 17th November, 2021, the Minister for Information, Mr Kojo Oppong Nkrumah, has been taking inputs from young entrepreneurs on how the government can deepen its entrepreneurial interventions.

Youth entrepreneurship has become topical in recent weeks following public discussions about how more young Ghanaians can be supported to succeed in private business.

Mr. Oppong Nkrumah through a live virtual conversation on Sunday October 31, 2021, dubbed “#ListenUP” sought to take feedback from young entrepreneurs on how the entrepreneurial ecosystem is functioning.

Feedback from the session will be channelled into government’s decision-making processes to inform its policy directions for the future.

Organised by the Ministry of Information, the live audio conversation on social networking site, Twitter, is an occasional platform for deepening engagements with the Ghanaian people and at the same time take feedback that will aid government to better roll out its policies.

The minister was joined by nearly 2,000 young entrepreneurs who freely shared their feedback and suggestions for improvement.

The Deputy National Youth Organizer of the NDC, Edem Agbana, who is also into farming, suggested that one of the means government could support young entrepreneurs in the country was through the creation of startup banks that would make available funds to young entrepreneurs at low lending rates to enable the to properly fund their businesses.

He bemoaned the lack of tax holidays targeted at young entrepreneurs.

One participant who also joined the Space bemoaned the ease of business registration in the country, noting that young entrepreneurs face difficulties to get their business registered and often times get frustrated.

He said though government had made frantic effort at digitising the business registration process, he believed a lot could still be done to make it seamless.

What to do differently

Proferring solutions, the participants agreed that already, the government had created a foundation of which young entrepreneurs should take advantage of. One of such foundation is the African Continental Free Trade Area (AfCFTA).

They were of the view that young entrepreneurs should take advantage of the free trade area and push their products into foreign markets to increase their profit margins.

One area participants also suggested would improve young businesses was investments in Research and Development (R and D).

This they said would enable young entrepreneurs to innovate and introduce new products and services to the market in order to rake in more revenue.