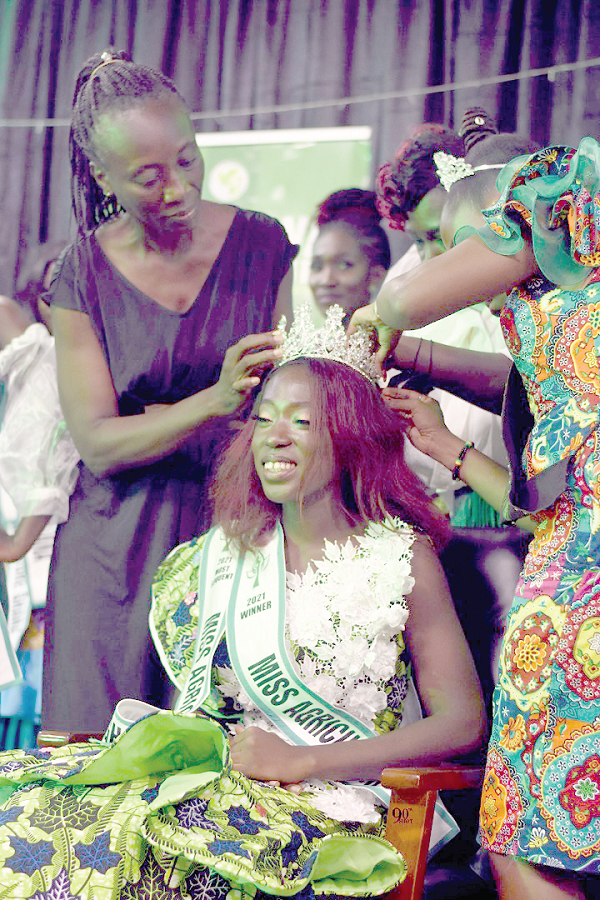 The introduction of the Miss Agriculture Ghana, a reality show to entice young ladies to participate in agriculture, has become a bait for young ladies to venture into the sector, be it mainstream farming or the value chain.

From a humble beginning four years ago, the beauty pageant is now an attraction for young ladies who love farming.

At the fourth edition of the reality show held in Accra, 24-year-old vegetable grower, Ms Rendy Abbam, was crowned Miss Agriculture Ghana 2021, after winning this year’s edition of the pageant.

Popularly called the Celebrity Farmer, Ms Abbam emerged the favourite, having warmed the hearts of the six-panelled judges, after coming on top of eight other contestants.

The contestants took turns to explain their intended agricultural projects, as they battled each other to impress the judges with their ideas, beauty and exhibitions.

However, it was Miss Abbam, who was most impressive right from the cat-walk, on the stage showcasing casual wear, official and evening outfits to her agricultural project and exhibition.

For her effort, Miss Abbam, who operates her farm in the Awutu Senya West District in the Central Region, took home the crown, a GH¢3,000 cheque, products from sponsors and a round-trip ticket to Dubai.

Her closest contender, a first year student of the Kwame Nkrumah University of Science and Technology (KNUST), Miss Stephanie Brew, an advocate for young people in agriculture, took the First Runner-up position, while a crop researcher, Ms Rhoda Okyere, picked up the Second Runner-up spot.

For their effort, the first and Second Runners-up received GH¢1,500 and GH¢500 respectively as well as products from the sponsors.

All the three winners would also be sponsored to this year's National Farmers' Day celebration to be hosted in the Central Region.

With the popularisation of the pageant, the story of youth, especially, young ladies venturing into the agricultural sector is now different as educated women are able to embrace the agribusiness sector.

When the pageant was launched in 2018, it was Miss Afriyie Obeng-Fosu, a mushroom farmer, who took home the crown and bragging right as the maiden agricultural queen, even though she never had any monetary reward.

That notwithstanding, she remains faithful to the reality show, featuring in every edition.

Miss Margaret Afriyie, who emerged as the 2019 Miss Agriculture Ghana, is doing well with her vegetable farm, while 27 year-old Miss Perfect Liz Naa Sackitey, the 2020 winner, is a poultry farmer.

The Founder of the reality show, who was also the 2016 Second Runner-up of Ghana’s Most Beautiful, Ms Oheneba Akosua Kyerewaa Yeboah-Ghansah, said the reality show sought to break the perception that agriculture was solely for men.

According to her, the show utilised tools popular with women - fashion, style, beauty, dedication and hard work to encourage women to venture into agriculture.

She lauded the winner of the maiden edition - Miss Obeng-Fosu - for her commitment towards the success of the awards, which she described as encouraging and worthy of emulation.

“Due to her commitment, last year during the grand finale, she was named the AgriShero of the Miss Agriculture Ghana Project 2020 due to her outstanding support for the project.

“We see that as a great example for most young people coming up,”she explained.

Ms Yeboah-Ghanah was happy that Corporate Ghana was taking an interest in the pageant, explaining that this year, for instance, four companies, namely Casa De Ropa, Food Factory Ltd, Mansowa Herbal Clinic and Carefront Travel and Tours had come on board as sponsors.

She was hopeful that many companies would turn up for the opportunity to sponsor and associate themselves with the project in subsequent years.

She said if for nothing at all, the reality show was unearthing the talents of young ladies, whose business areas would help ensure the availability of food, leading to food sufficiency in the country.

“They will not only increase food production and processing; they will also become employers, and that is what we are aiming at,” she explained.

Ms Yeboah-Ghansah, who is a rice farmer and is also engaged in packaging of food items, said her motivation was the love for nature and the quest to contribute her quota in achieving the Sustainable Development Goal Two, which aims at achieving Zero hunger.

She explained that the objective was to equip the ladies through advocacy, training, networking and capacity building and to let them know that a farmer could still be beautiful.

Ms Yeboah-Ghansah was happy that all the finalists had “great agribusiness ideas” and was hopeful that they would pursue those ideas.

The contestants, she said, proposed projects such as farming, adding value to cassava, vegetables, mushroom and tiger nuts, while others looked at venturing into the rearing of snails, livestock and rabbits.

The reality show has a strong backing from the Ministry of Food and Agriculture and the Chamber of Women in Agribusiness Ghana.