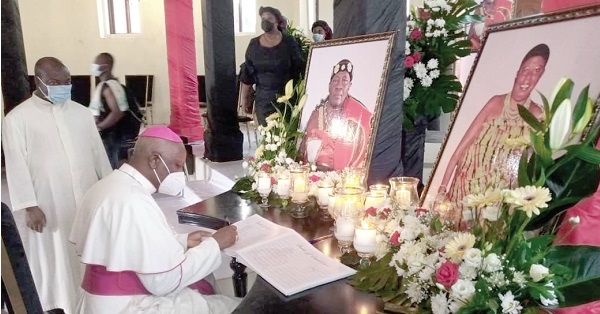 Most Rev Afrifah Agyekum, Bishop of the Koforidua Diocese of the Catholic Church, signing the book of condolence Follow @Graphicgh

Thousands of mourners from all walks of life last Monday, ( March 7), defied a downpour in Koforidua to observe the one-week rites of the passing of the Omanhene of the New Juaben Traditional Area, Daasebre Professor Emeritus Oti Boateng, and the queen mother of the area, Nana Yaa Daani II.

The Yiadom-Hwedie palace and its surroundings were awash with red and black signifying how the death of the two leading traditional rulers had plunged New Juaben into a state of sorrow.

Daasebre Oti Boateng went to the village on August 10, 2021, while Nana Yaa Daani joined her ancestors about three months ago.

The mourners included the Vice-President, Dr Mahamudu Bawumia, some paramount chiefs or their representatives, the academia, the United Nations (UN) where the late Oti Boateng once worked, Ministers of State, representatives of political parties such as the New Patriotic Party and the National Democratic Congress and Members of Parliament from the political divide.

Traditional rulers or their representatives from the Eastern Region and other parts of the country as well as Christian and Muslim leaders were also in attendance at the event.

The Chief mourner, the Juabenhene, Nana Otuo Siriboe II, who is a junior brother of the late Daasebre Oti Boateng, sat in state to receive mourners, some of whom signed the book of condolence in memory of the two departed traditional rulers.

The occasion also witnessed drumming and dancing and the singing of dirges.

Although the public was expecting the announcement of the date for the burial and final funeral rites of the two departed traditional rulers, it was, however, not announced.