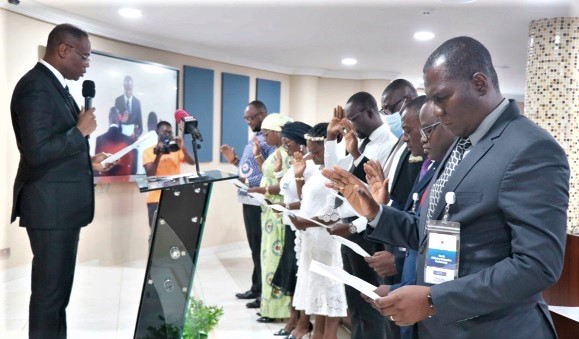 The President of the Apostolic Church, Ghana, Apostle Dr Aaron Ami-Narh, has inaugurated the leadership of the youth ministry of the church aimed at reviving the church into a youthful one.

According to him, the Youth Ministry was the instrument God would use to revive the church, adding that the new leaders should not to see their weaknesses but rather God’s strength in fulfilling their assignment.

Apostle Dr Ami-Narh made that known in the month of March, which is not only to be remembered as the month of Ghana’s independence but also the Youth Ministry’s birth month.

“We are Ghanaians by birth and Christians for life and as such we must continue to love one another and win all lost souls for Christ,” he stated.

Apostle Dr Ami-Narh later prayed urging them to be efficient and active to keep the movement working at all times.

He said the Apostolic Church, Ghana valued the roles the youth had played in the church and had decided to structure the core mandate of the movement to make them more viable.

“Most often, the youth have followed certain practices which are not Apostolic,” he said and added that the time had come for all the youth to follow the structures and believes of the church and Christ.

Apostle Dr Ami-Narh further stated that the management of the church brought an end to The Witness Movement as a wing which he said was a significant shift to the commencement of The Youth Ministry strategically serving as a bridge between the Children Ministry and the Men’s and Women’s Movements.

Additionally, he noted that the young people between the ages of 13 and 25 were required to join the Youth Ministry which would help curb the migration of the youth to other denominations.

A new youth logo was unveiled by the Vice-President of the church, Apostle Frederick Agyemang, to serve as a guide for leaders of the movement as they work with other associations to make the church vibrant and a preferred choice for the youth.

A Senior Minister, Prof. Alex Edwards and Mr Samuel Atiogbey were credited with the concept the design of the logo.

Apostle Dr Ami-Narh urged the youth to remain resolute and committed to the core mandate of Ghana, as well as the church and to live as examples for the youth.

“As the light and salt of the world, we are expected to show the way and the path for our fellow brothers and sisters to come to the knowledge of Christ,” he stated.