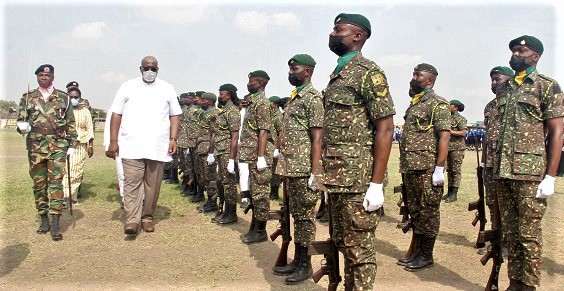 Three regional ministers who hosted this year’s Independence Anniversary parade have called for unity among Ghanaians to preserve the peace and stability that the country enjoys.

They have also urged Ghanaians to be committed to carrying out their civic responsibilities as their contribution towards the development of the country.

Some municipal and district chief executives (MMDCEs), who hosted parades in their jurisdictions, also made similar calls, stressing that it was key in mobilising resources for the nation’s development.

At El-Wak Stadium in the La Dade-Kotopon Municipal Assembly (LaDMA), where the Greater Accra Regional parade was held, about 3,000 pupils, students as well as men and officers of the security services took part in the parade.

Mr Quartey, who took the salute, stressed the need for the citizens of the country to be united despite their divergent opinions and backgrounds. He urged Ghanaians to always choose democracy and peaceful resolution of differences to keep Ghana as the beacon of democracy on the continent.

Also gracing the event was the MCE of the La Dade-Kotopon Municipal Assembly (LaDMA), Mr Solomon Nikoi, who called on Ghanaians to cooperate and collaborate with government to make the country better for all.

He called on all to support the government to initiate and implement prudent economic measures which would bring the country back on track.

All the basic schools and senior high schools who participated in the march past were also given awards for their participation.

From the Ayawaso Central Municipal Assembly (ACMA), Kweku Zurek reports that a contingent of 450 students from JHSs and the Accra Technical Training Centre as well as the Market Women Association gathered at the Kotobabi SWAG Park to celebrate the day.

The Municipal Chief Executive of the ACMA, Alhaji Mohammed Quaye, said students in the municipality were key stakeholders of the celebration and as a result, it was important to give them an education that would result in the consolidation of the gains the country had made from attaining independence.

From Tema, Benjamin Xornam Glover reports that the Metropolitan Chief Executive, Yohane Amarh Ashitey, and the Metropolitan Director of Education, Bernice Ofori, reviewed the parade held at the Tema Stadium.

The parade was formed by 1,400 pupils and students drawn from some basic, junior and senior high schools in the Tema Metropolis.

The TMA security guards and some voluntary organisations, including the Tema Market Women Association, the Boys and Girls Brigade also took part in the parade commanded by Prince Amarh and supported by the Ghana National Fire Service Regimental Band.

Mr Ashitey, in his speech, urged the residents to support the Assembly's effort to keep the metropolis clean.

He said the assembly had engaged the Ghana Education Service in the Tema Metropolis to map out strategies in the distribution of resources and to enhance the delivery of quality education services at all levels of the school structure.

Mr Ashitey said the TMA was working closely with Cargill as well as a Turkish multi-national firm to construct modern playgrounds in the metropolis to empower the youth and help create viable alternatives to enable them to develop their sporting talents.

Mrs Ofori said the Directorate would continue to pursue strategies to ensure an improvement in academic performance within the metropolis.

In attendance at the Independence Day celebration in Tema were the MPs for Tema Central and Tema East, Hon. Yves Hanson Nortey and Hon. Isaac Ashai Odamtten, respectively, the acting President of the Tema Traditional Council, Nii Adjetey Agbo II, Heads of Security Services, Assembly Members, Heads of Decentralised Agencies of the TMA.

From Koforidua, Haruna Yussif Wunpini reports that the regional parade was held at the Koforidua Jubilee Park in the Eastern Region because the Jackson Park, where the parade had always been held, is currently under renovation.

Seven SHSs, 16 basic schools, including the school for the deaf, and eight cadet corps as well as eight contingent of the security services took part in the parade, commanded by Major Erasmus Delanya Yeyeava from the First Infantry Battalion.

Schoolchildren from Presby Basic 'B' put up a spectacular gymnastics display including a combined display from the various security services to demonstrate their preparedness to combat crime in the country.

Mr Acheampong, in his address, said government would continue to implement programmes and policies intended to improve the socio-economic well-being of the citizens.

The regional minister advised the school children to take their studies seriously to enable them to realise their future dreams.

Samuel Kyei-Boateng reports from Asamankese that the MCE of the West Akyem Municipal Assembly, Seth Oduro-Boadu, in his address, urged Ghanaians to honour their tax obligations and support government policies and programmes to help achieve the national developmental agenda.

He said the municipality placed last out of the 33 municipal and district assemblies in the Eastern Region.

He described the performance as unacceptable, and called on the municipal director of education, circuit supervisors, teachers and pupils to work harder to improve on the performance this year.

Sixteen Primary, 10 junior high and three senior high schools participated in the ceremonial march past, which also featured a number of voluntary organisations.

From Nadowli, where the Upper West regional parade was held, Emmanuel Modey reports that 2,500 pupils and students from the basic and SHS took part in the march past with music provided by the Ghana Police Service.

Apart from that, a contingent of seven security services, made up of the Military, Police, Immigration, CEPS, Fire, Prisons and a cadet corps of Queen of Peace Senior High School at Nadowli, also took part in the march past.

After taking the salute for the parade, the Regional Minister, Dr Bin Salih, in his address, made a passionate appeal for Ghanaians to accept and support the E-levy being introduced by the government since it would assist in transforming the economy.