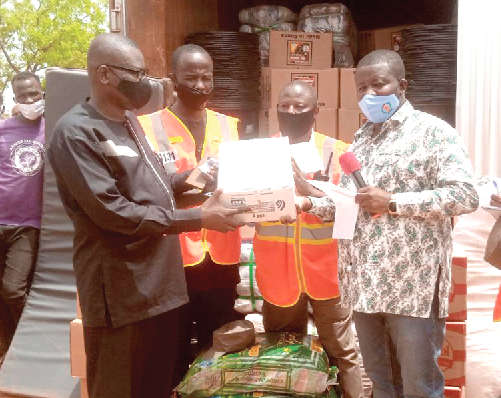 The National Disaster Management Organisation (NADMO) has presented relief items to residents of Chamba and its environs in the Nanumba North Municipality of the Northern Region who were affected by a rainstorm that hit the community in February, this year.

The gesture was meant to mitigate the challenges that confronted victims of the disaster, and to restore their livelihoods to some extent.

The Director-General of NADMO, Nana Agyemang Prempeh, handed over the relief items at a ceremony at Chamba, last Wednesday, and said they were to lessen the plight of the victims.

He said the presentation followed an assessment of the disaster to discover the main aspects of the lives of victims that were affected, indicating that the specific type of disaster in the municipality had never happened to any district or municipality in the country.

He, however, commended the Member of Parliament (MP) for the area, who doubles as the Defence Minister, Mr Dominic Nitiwul, for his support when the disaster occurred.

Shortly after the disaster, Mr Nitiwul presented 175 packets of aluminium roofing sheets to the victims, and helped to restore water and electricity supply.

The NADMO Director- General said it was regrettable that there were fewer trees in the area, and so they could not reduce the intensity of the storm.

"In the Northern part of the country, we don't have much trees which makes it difficult to prevent rainstorms," he said.

He said some other victims had built with inferior or improvised materials, making it easy for the storm to rip off the roofing sheets on their buildings.

"The individuals on their own should inculcate the culture of maintenance, especially around this time. They must do some kind of checking on their roofing in times like this," he added.

Receiving the items on behalf of the victims, the acting Nanumba North Municipal Chief Executive (MCE), Mr Abdulai Yaquob, expressed appreciation to NADMO for the support, indicating that some of the items would be distributed in Chamba and the other affected communities, while the roofing sheets, especially would be used to fix the schools and other affected public institutions.

Last month, a rainstorm hit Chamba and seven other communities in the Nanumba North Municipality, affecting about 792 households and other public institutions, including schools, a hospital, and a police station.

Six people got injured as a result of the rainstorm, and have since been treated and discharged from various health facilities.