"More education needed on gender and gender based violence" 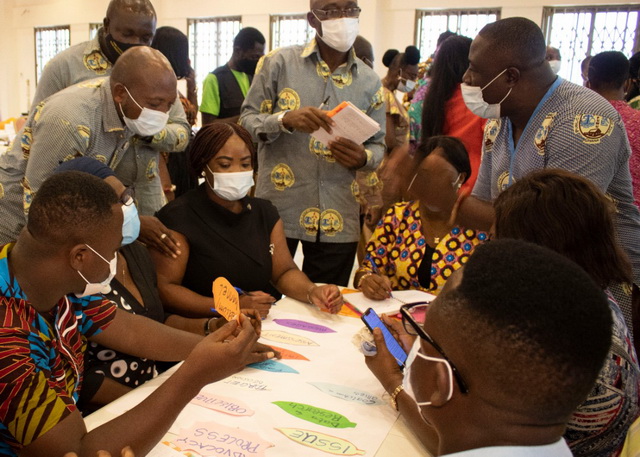 The Gender Co-ordinator of the Public Utilities Workers Union (PUWU), Mrs Joyce Maku Appiah says it is important for workers and their leaders to understand issues of gender and gender based violence.

Speaking to the media at a three-day training workshop organized by PUWU for selected executives at the PUWU Hospitality and Conference Centre at Kasoa in the Central Region, Madam Maku Appiah said workers must be equipped with a better understanding of gender and skills on how to integrate the provisions of the ILO Convention 190, as a mechanism for mitigating the increasing cases of violence and harassment at work and in the community.

Joyce Maku Appiah said the Union included men in the training because harassment does not only affect women.

She said men at the workplace are also at the helm of affairs and must therefore be educated on such issues to enable them handle such incidents properly when reported to them.

Joyce Maku Appiah observed that there are a number of incidents of violence and harassment at the workplace but because the attention is often on sexual harassment, other forms of harassment which equally need awareness creation is usually disregarded.

“If you look at the definition of harassment, it involves psychological, verbal and other things but our focus has always been on the sexual so most of the time we do not take the other aspects serious”, she said.

Mrs. Appiah said the workshop has helped broaden the understanding of the members on some of the things that have over the years been taken for granted.

“The workshop has broadened the understanding of the members and some of the things we usually take for granted are now being taken seriously. I also observed that the knowledge on these issues are low and it is very important that we create awareness even in the world of work”, she reiterated.

For her part, the chairperson of PUWU National Women Committee, Madam Margaret Hammond said there is a high prevalence of gender-based violence and abuse in Ghana.

She said out of ten women in the workplace, eight have had to endure various forms of abuse which is not only restricted to physical abuse, adding that most of the time victims of such incidents remain quiet because of stigmatization and the fear of losing their jobs.

“Gender based violence and abuse are really happening in Ghana and many people do not talk about it. If you talk to ten women, you may have at least eight of them that have gone through that. People do not say anything because they want to safeguard their jobs and another reason is the fear of stigmatization from colleagues and friends”, she said.