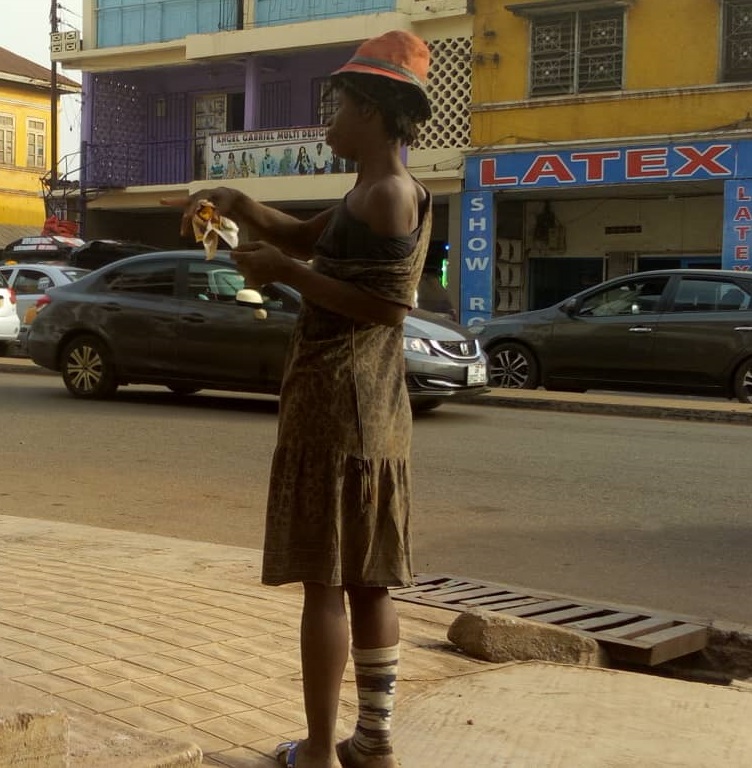 A mentally-challenged person on the street
30.5k Shares

The number of mentally-challenged persons roaming on the streets of Sunyani, the Bono Regional capital, continues to increase daily.

Their existence on the principal streets of the town poses danger to residents as some of them are seen holding offensive weapons such as sticks and stones.

Some food vendors are the most affected by these mentally-challenged people as they sometimes storm the joints to demand food and when the vendors delay in acceding to their demands, they employ force to take what they want.

According to some of the vendors, they sometimes had to struggle with the mentally-challenged people when they attacked them for food.

When contacted on the increase of mentally-challenged people on the streets, the Bono Regional Director of the Department of Social Welfare, Mr Emmanuel Kingsford Anipa, who is also in charge of the Bono East and Ahafo regions, told the Daily Graphic that the department was only responsible to provide accommodation when the Mental Health Department was ready to pick and treat the mentally-challenged persons.

"The Mental Health Department, therefore, has to pick them from the streets for screening and we will provide a place for them while they are being treated.

"We are not directly involved in the management of mentally-challenged people, we only provide room for their screening and treatment," he stated.

"These mentally challenged people are very temperamental when it comes to waiting for food," she said, explaining that "when you delay in serving them, they will cause trouble.”

"I always package some of the koko and as soon as they come I quickly hand them over to avoid trouble," Adama said.

Some of these mentally-challenged people, including some females and those of youthful age are usually found on streets, the highways and roundabouts of the town.

Their presence also poses danger to commuters, especially drivers and motorbike riders as they cross the road without observing safe road crossing ethics to avoid being knocked down.

They also gather and carry waste materials such as plastic bottles, plastic bags, empty boxes and rags, among others, from dump sites and deposit them in the heart of the city.

That also makes the township filthy, making it to lose its respect as one of the cleanest cities of the country.

They sometimes carry these filthy materials and roam to and fro along the major principal streets of the town, causing discomfort to residents.

Last year, the Bono Regional Mental Health Coordinator, Mr Joseph Yere, told the Daily Graphic at a forum that a total of 672 mentally-challenged people who had been roaming the streets in the Bono, Bono East and Ahafo regions had been identified and earmarked for treatment.

He said the Regional Mental Health Department submitted budgets to the three regional coordinating councils for their treatment and reintegration into society and was waiting for approval of the budget to commence their treatment at the appropriate health facilities.

Mr Yere explained that the mentally challenged had been left to roam the streets because there were no drugs at the various health facilities in the three regions for their treatment.

He indicated that if funds were released, the patients would be put into groups and treated in batches.

Notwithstanding these pronouncements, nothing seems to have been done one year on and the situation has even worsened.

At that same forum, the Dean of the Faculty of Education of the Catholic University College (CUCG), Professor Stephen Ntim, also told the Daily Graphic that 70 per cent of the youth in the country were involved in drug abuse.

He said the country was sitting on a time bomb due to the increasing number of youth engaged in drug abuse coupled with the high unemployment situation.

Prof. Ntim, therefore, called on stakeholders to work towards saving the youth from substance abuse, stating that every country relied on its youth for development.

According to him, since the youth held the future of the country, they needed to be protected from all forms of social vices to enable them to grow to be useful adults.

A resident, Mr Samuel Kwasi Yeboah, told the Daily Graphic that the presence of the mentally-challenged persons on the streets posed a serious threat to residents, especially children.

He explained that children were more vulnerable to these mentally-challenged people because of their age.

Mr Yeboah, therefore, called on the Sunyani Municipal Assembly and other stakeholders to consider establishing rehabilitation centres to help rehabilitate these mentally-challenged persons on the streets.

A taxi driver, Mr Dickson Owusu Dankwa, told the Daily Graphic that it was dangerous to drive in areas where these mentally-challenged were located.

He explained that they cross the road without care and throw objects into vehicles to soil clothes of occupants.

That, according to him, could result in accidents and called on the Sunyani Municipal Assembly to find an appropriate way of handling mentally-challenged persons roaming in the municipality.