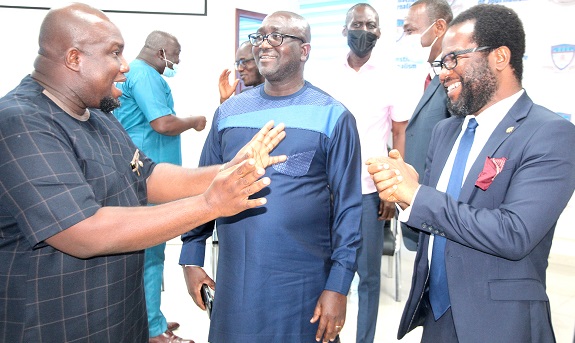 The Executive Secretary of the National Media Commission (NMC), George Sarpong, has underscored the need for a comprehensive regulatory framework that will ensure a democratic regulation of the media to guide them in their operations.

That, he said, was to avoid some of the issues confronting the media space in the country in recent times.

“The challenge we are having in Ghana today is that we have liberalised, which is a great thing in consonance with the expectations of the Constitution,” he said.

“The challenge, though, is that we liberalised our environment without putting together the policies and regulatory framework that we need to promote the benefit of media freedom, while addressing any issues that come with it. That is what is leading to what we are seeing,” Mr Sarpong said on March 17, 2022 at a public forum organised by the Ghana Institute of Journalism (GIJ).

The event was on the theme: “Re-Examining Freedom of Expression, Ethics and Threats to the Safety of Journalists”.

According to Mr Sarpong, there was no need to complicate the discussions, and that all that needed to be done was to “put together an effective regulatory system that ensures the democratic regulation of the media, and we will be fine”.

Asked about issues with the Ghana Journalists Association (GJA) Code of Ethics, he explained that ethics did not implement themselves, and that they offered philosophical ideas about the right thing to do.

“But we are saying in regulations that nobody does what is expected. People only do what is inspected. So the existence of the ethics, by themselves, won’t secure good behaviour by people who don’t have good incentives towards behaviour. That is why in every field that matters, there’s a certain regulatory system.

On matters of free expression, Mr Sarpong said there were two critical provisions that needed to be looked at and cited Articles 21 and 162 of the 1992 Constitution.

“I want you to keep in mind that the lawmaker does not use words in vain,” he emphasised, and charged students and practitioners of journalism to take note of that.

The NMC Executive Secretary noted that analysing issues about the right to free expression could be technically, philosophically and legally complicated, and that anybody who wanted to engage in that required patience to understand how it worked.

“Anytime you are faced with the situation, please think of it in terms of which of the limitations is the issue here. Is it the place limitation? Is it the time limitation? Is it the manner limitation? If you are able to identify these elements, please come under Article 164 to see whether the particular piece of legislation that you are dealing with falls within the list that the Constitution itself has provided,” he said.

A panel member, Dr Ebo Afful, who is the Head of the Department of Communications Studies at GIJ, suggested, among other things, that the National Communications Authority should not issue licences for the establishment of television and radio stations, since that was supposed to be an arm of the executive.

“So it is clear that it cannot be fair to terms of issuance of TV and radio licences. The responsibility should be given to the NMC, and what it means is that the NMC should always be made up of members who have the commitment to ensure high standards of media practice in this country.

“Secondly, media democracy and development should be a subject that should be taught at the senior high school level, as well as undergraduate level. Hopefully, Ghana will begin to have a new generation that will understand and appreciate the role and contribution of the media, so that we can be citizens who agree to protect our press freedom,” he said.

Another panel member, Nana Kwaku Kumi, a lawyer with the Commission on Human Rights and Administrative Justice (CHRAJ), made mention of the GJA Code of Ethics and wondered about the number of journalists and media practitioners who were familiar with it.

“Is it the case that everybody finishes school, finds a radio station owned by his uncle and decides to be on air and then spew out anything?” he asked.

He said journalism was a serious profession that must be taken seriously.

In his opening remarks, the Deputy Rector of the GIJ, Professor Eric Opoku Mensah, said the country’s constitutional democracy was anchored on a number of principles that guaranteed free speech and expression that enabled the operation of a liberal, divergent and uncensored media.

He said recent events could question whether the country was not quietly re-operationalising a law such as the Repeal of the Criminal Libel and Seditious Law Amendment Act, Act 602 with the arrest of journalists and citizens in alleged violation of free speech.