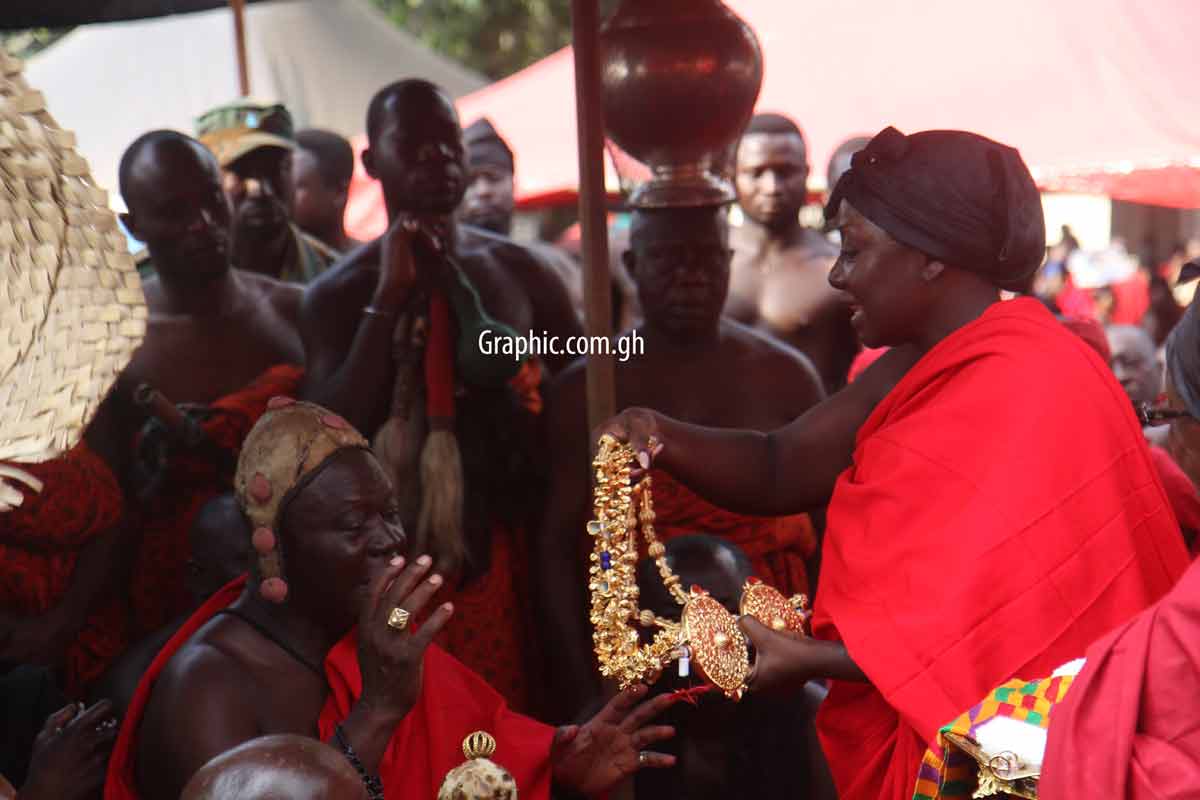 Lady Julia, wife of the Asantehene, Otumfuo Osei Tutu II on Wednesday presented a gold necklace and other gifts to Otumfuo as part of the final funeral rites of the late Asantehemaa, Nana Afia Kobi Serwaa Ampem II.

Dressed in a red traditional mourning cloth, [kobene over black cloth] and a matching headgear, she majestically led the team of the spouses of the royal house to do the presentation, in a somber mood.

Known traditionally as 'awisiado', it is a symbolic presentation to console the husband for the loss of his dear mother while the other items were to help in the organisation of the funeral.

The other items presented included pots of palm wine, cloths, drinks, meat, boxes of water, a white ram and handkerchiefs.

The totality of the richness of Asante culture was summed up in the appearance and display on not only the Chief mourner - Asantehene - but the unity of purpose with which Asantes from all walks of life put their all in the funeral, reports Kwame Asare Boadu.

Otumfuo Osei Tutu wore a rich 'kobene' , a red mourning cloth with a black and ash headgear to signify his state of mourning, but Kuntunkuni - the black cloth- dominated the forest of mourners.

As the Asantehene rode in palanquin from inside the main palace to the Dwabirem, he majestically danced to the fontonfrom drumming amidst the firing of muskets.

A good number of chiefs from the Upper West , Brong Ahafo, Central and Western regions were also at the funeral grounds to mourn with the Asantehene.

Among the large list of dignitaries was the Togolese President, Faure Gnassingbe, the Minister of National Security. Mr Albert Kan-Dapaah, Minister of Tourism, Madam Catherine Afeku, Justices William Atuguba and Paul Baffoe Bonnie from the Judiciary, and a delegation from the Ghana Bar Association (GBA).

Before Otumfuo Osei Tutu arrived at the Dwabirem, an announcement was made for the cessation of musket firing inside the main grounds .

The announcer cautioned that the rapidity with which the firing was going on was not safe for mourners.