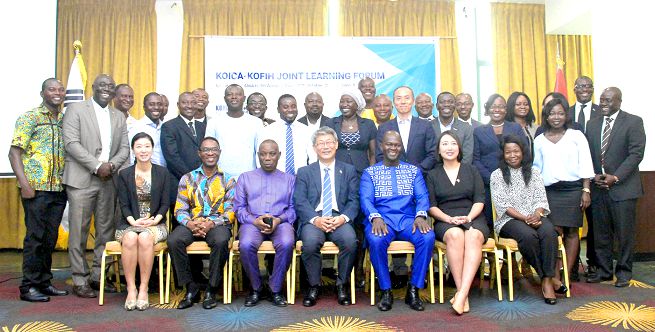 A group of medical practitioners have donated units of blood to the Greater Accra Regional Hospital (Ridge Hospital) and the Princess Marie Louise Children's Hospital.

Members of the Korean Foundation for International Healthcare (KOFIH) and the KOFIH Global Alumni (KGA) Ghana Chapter donated 69 units of blood to both hospitals in Accra last Friday.

The President of KGA-Ghana, Dr Ralph Armah, said the donation, a voluntary blood drive and media engagement, was part of activities lined up for the year.

The alumni group organised a blood donation exercise at Osu in Accra on Valentine’s Day, during which the 69 units of blood were collected and screened to be given to the two beneficiary hospitals.

Dr Armah stated that the units donated to the Ridge Hospital were based on the size of the hospital and its bed occupancy, with the remaining given to the Children's Hospital where blood was an essential consumable.

He added that the donation would continue on Saturday, March 5, 2022, at Mantse Agbona at James Town in Accra as part of their medical outreach, in collaboration with the National Blood Transfusion Service.

"We will give the majority of the donated blood to the National Blood Transfusion Service, maybe two-thirds to them and one-third to the Princess Marie Louise Hospital, to shore up their blood bank,” he said.

The Medical Director of the Ridge Hospital, Dr Emmanuel Srofenyoh, expressed gratitude to the team and the Korean government for the initiative.

“Blood is very critical in health delivery, and yet it is not easy to acquire. This gesture will help save the lives of many patients who depend on it,” he said.

The Medical Superintendent of the Children’s Hospital, Dr Maame Yaa Nyarko, said children were the third highest consumers of blood although they could not partake in blood donation activities.

“This gesture is going to help many children. Sometimes children don’t really need a whole unit of blood, but just a little to save their lives, so we are thankful to KOFIH for recognising the needs of children,” she added.

The KGA blood donation lead, Dr Emmanuel Addipa-Adapoe, explained that the donation exercise provided several benefits to both the recipient and the donors.

He said blood donation was a “voluntary unremunerated exercise and the best form of gift” that anyone could give out of their free will.

He said every donor was given a card which identified them as voluntary unremunerated blood donors.

“Since you are a donor, you have a donor card which comes in handy when you are in need one day. When you present it to us in our facility, we are obliged to return that favour. That is why we call the place we store blood a blood bank. It’s like you are making savings for that rainy day so that when you are in need we give you blood,” he said.

The recipient of the blood, he said, also benefited a lot. He explained that the blood contained fresh frozen plasma, platelets and pack cells which were essential.

Dr Addipa-Adapoe again stated that for some health conditions suffered by children, such as sickle cell anaemia and jaundice, they required blood transfusion to minimise their risk of fatality.