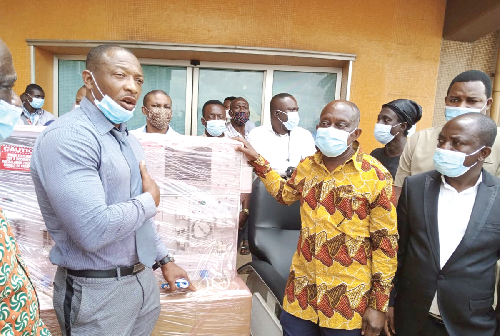 The Komfo Anokye Teaching Hospital (KATH) in Kumasi has rolled out a programme to expand its dialysis facility from a six-bed to a 30-bed capacity to meet the increasing demand and reduce cost.

The current six-unit facility at the Polyclinic is being expanded to 22 to add up to an ongoing eight bed capacity being built at the Emergency and Accident unit.

The projects are expected to be ready in December.

The Chief Executive Officer of KATH, Dr Oheneba Owusu-Danso, announced in Kumasi last Monday when the Sankofa  Medical Charities based in Atlanta, USA, founded by a Ghanaian, presented two dialysis machines and 12 dialysis chairs valued at $60,000 to the hospital.

The donation  was facilitated by Ghana's former ambassador to China, Mr Edward Boateng.

Dr Owusu-Danso said the current expansion projects and the installation of various equipment was part of a broad-base policy of the facility to offer state-of-the-art delivery to its increasing number of patients, expecially those from the Northern sector.

The secretary to the foundation, Dr Al Majid Adams, said since the foundation was formed by Ghanaians, it was only fair that attention was shifted to Ghana for assistance.

He said the foundation would liaise with KATH for future need-based assistance.

The Ashanti regional minister, Simon Osei-Mensah, who received the items on behalf of the hospital before handing them over to the CEO, commended  the former ambassador to China for spearheading the support calling on Ghanaians abroad to give back to their motherland.